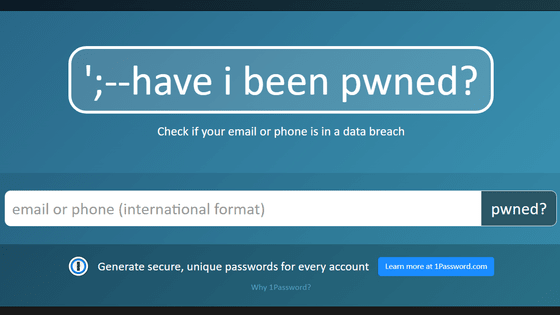 Troy Hunt: The Facebook Phone Numbers Are Now Searchable in Have I Been Pwned
https://www.troyhunt.com/the-facebook-phone-numbers-are-now-searchable-in-have-i-been-pwned/

Have I Been Pwned adds search for leaked Facebook phone numbers
https://www.bleepingcomputer.com/news/security/have-i-been-pwned-adds-search-for-leaked-facebook-phone-numbers/

On April 3, 2021, it was discovered that Facebook had leaked email addresses, phone numbers, profiles, etc. for 533 million people. Therefore, HIBP immediately responded to this problem by making it possible to search by email address whether the personal information leaked from Facebook does not contain your own data. Hunt, the author of HIBP, was initially reluctant to respond to phone number searches. This is because the phone numbers contained in many databases are often inconsistent in format, making it difficult to match them with regular expressions, unlike email addresses. In addition, there was a risk that HIBP would be used for identification by a third party because HIBP corresponds to the phone number.

However, while the information leaked from Facebook contained more than 500 million phone numbers, it contained only millions of email addresses, so 99 of the people whose personal information was leaked. More than% had a problem that '' Not applicable 'is displayed even if you search by HIBP' even though you are actually suffering from damage. Also, in the data leaked from Facebook, the format of international phone numbers was unified, so it was possible to easily extract phone numbers.

Should the FB phone numbers be searchable in @haveibeenpwned ? I'm thinking through the pros and cons in terms of the value it adds to impacted people versus the risk presented if it's used to help resolve numbers to identities (you'd still need the source data to do that).

So Hunt decided to add some data so that he could search for phone numbers on HIBP. At the time of writing the article, it is said that the international phone number code has been supported up to the number starting with '1' '3' '4' '6' '7' '8'. The Japanese code corresponds to the data added with '81', so let's actually search with HIBP.

Have I Been Pwned: Check if your email has been compromised in a data breach
https://haveibeenpwned.com/

Access HIBP from the above URL and enter the phone number in the search field. For example, if the phone number registered on Facebook starts with '090', change '0' to '+81' for international calls to '+8190', then enter the remaining numbers without hyphens and ' Click pwned? In addition, '+' may or may not be an option. 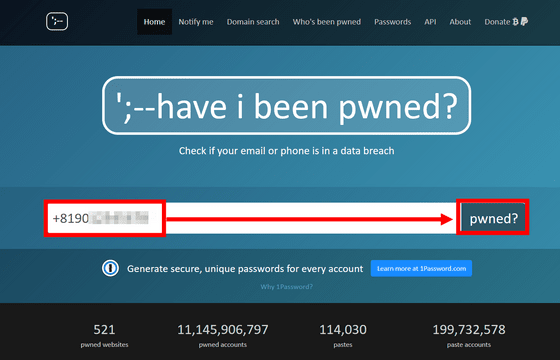 If the phone number you entered is not included in the leaked phone number, 'Good news — no pwnage found!' Will be displayed. 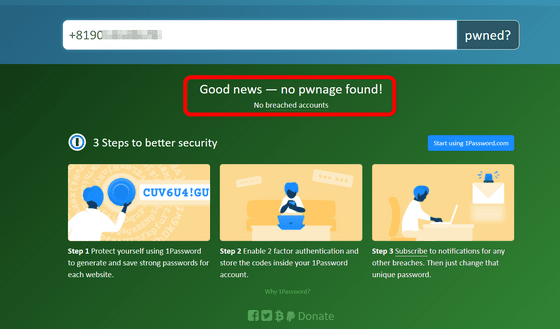 The phone numbers added to HIBP are only those leaked from Facebook in this leak problem, and do not include the phone numbers leaked in various past leak problems. However, Hunt said he would consider if a Facebook-like problem reoccurs in the future and he thinks it should support phone number searches. Also, since there are various variations in the data leaked from Facebook, it is necessary to note that the possibility that your information is leaked is not zero even if you do not find it by searching with HIBP. did.