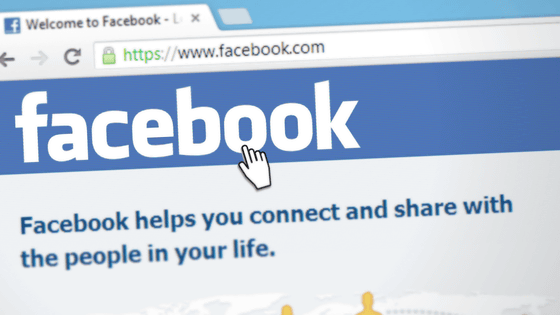 On April 3, 2021, it was discovered that 533 million Facebook user data had been leaked. 'Have I Been Pwned? ', An online service that allows you to check the leakage status of personal information for free, has announced that it has responded to the 'email address' leaked by this incident.

Have I Been Pwned: Pwned websites

On April 3, 2021 local time, Alon Gal, chief technology officer of cybercrime research firm Hudson Rock , announced that the personal information of more than 533 million Facebook users was disclosed on the hacking forum. discovered. As a result of the user data discovered by Mr. Gal being verified by Business Insider of the news media, it has been confirmed that this user data belongs to the account that actually exists on Facebook.

It has been pointed out that 533 million user data leaked from Facebook, which will be the worst data leak in history --GIGAZINE All user data found to be leaked from Facebook included phone numbers. However, some data included name, gender, date of birth, place of residence, place of employment, etc., and data including 'email address' was 2.5 million, which is about 0.5% of the total.

Have I Been Pwned: Check if your email has been compromised in a data breach
https://haveibeenpwned.com/

To check the leak status, enter your email address in the search box and click 'pwned?'. 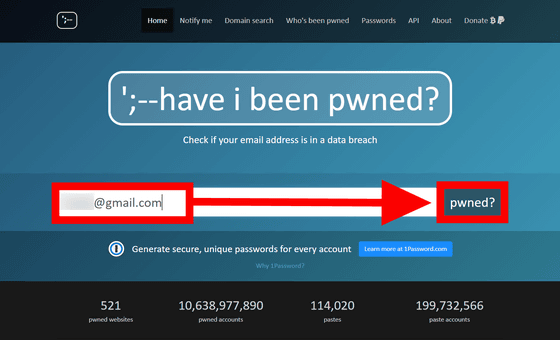 If the email address you entered has not been leaked, 'Good news — no pwnage found!' Will be displayed on a green background as shown below. 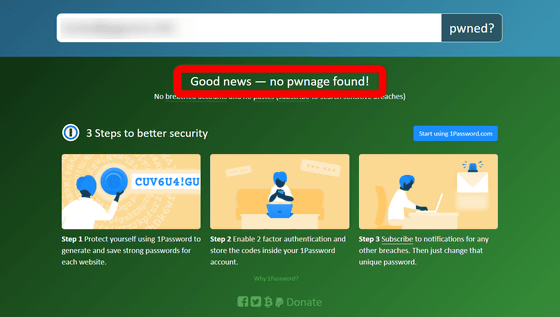 On the other hand, if a spill is confirmed, the message 'Oh no — pwned!' Is displayed on a red background. 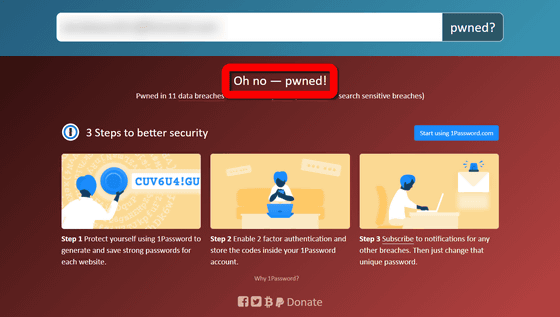 At the bottom of the page, the cause of the spill and the type of data spilled are listed. Facebook's data leakage incident was widely reported, but since data may be leaked from the service you are using without knowing it, you can easily check whether your data is leaked for free. It's a good idea to check it regularly with 'Have I Been Pwned?'.