Brown University in the United States, which develops a system that connects the brain and a computer to 'control the computer just by thinking' and 'control the artificial limbs by thinking', newly announced on March 31, 2021 We have succeeded in making the system that had to be connected to wireless. ' This will allow patients to carry out experiments without having to go to the laboratory, and is expected to enable new clinical trials that could not be done by wire. The Brain computer interface (BCI) technology, which connects the brain to a computer, is one of the research fields that has been attracting attention in recent years. If the brain and computer can be connected, even people who cannot move can type letters and talk with people, or move artificial limbs just by thinking, which can dramatically change the lives of many people with disabilities. ..

A new study by Brown University in the United States has succeeded in wirelessly connecting the brains of people with paralyzed limbs to computers. This is the first successful wireless connection between a brain and a physical computer in clinical trials.

A research team at Brown University started a brain implant project called BrainGate in 2002. In 2012, it was also announced that a patient with paralyzed limbs due to a brainstem attack succeeded in operating the robot arm.

In a new study, clinical trials were conducted in two patients who were paralyzed due to spinal cord injury. Normally, BCI requires the body to be connected to a large device, but a new attempt required a transmitter mounted on the patient's head, about 5 cm in diameter and weighing 42 grams. only. When the subject wearing this transmitter thought, it was confirmed that the signal of the cranial nerve was sent to an external computer, and the click and input were performed on the tablet computer. This is the transmitter called Brown Wireless Device (BWD) used in the experiment. Battery life is 36 hours, and 200 electrodes record 48 megabits of brain signals per second. 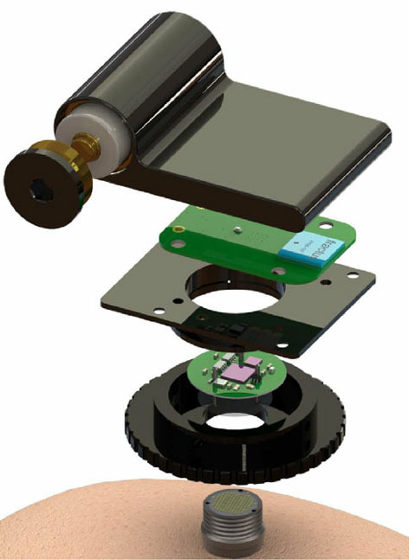 'We have shown that this wireless system works the same as the wired system that has been the standard for BCI for years,' said John Simeral, a researcher. Because it is similar to a system, wireless devices can use the same decoding algorithms as before. The only difference is that they don't have to be physically connected to the device anymore. We have opened a new door. '

Low-bandwidth wireless devices have been developed so far, but the epoch-making point is that the device developed this time transmits signals of all spectra recorded in the cortex. The new device is expected to enable clinical trials that are difficult to perform with wired BCI.

In addition, this device has a great advantage in that the subject can use the device at home without visiting the laboratory even in the situation where the city is blocked due to the epidemic of the new coronavirus infection (COVID-19). It is said that there is.