How effective are 'Ad Choices' to prevent user tracking? 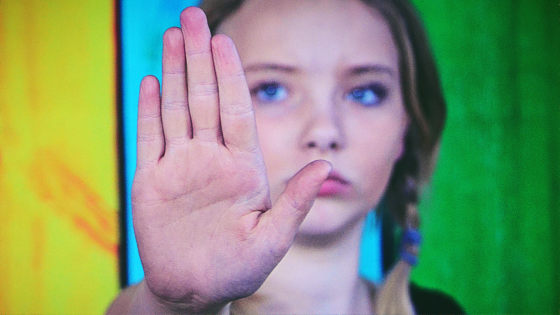 In recent years, the use of third-party cookies has been restricted from the perspective of protecting people's privacy, but in fact, a program to 'opt out of the use of personal information' has existed for 10 years. Investigative journalist Aaron Sankin is experimenting with the accuracy of this program, called ' AdChoices.'

I Tried to Use the Ad Tech Industry's Tool to Opt Out of Personalized Ads. Did It Work? – The Markup
https://themarkup.org/privacy/2021/03/25/i-tried-to-use-the-ad-tech-industrys-tool-to-opt-out-of-personalized-ads-did-it- work The advertisements displayed on the website are not random, and 'advertisements that are likely to be of high interest to the user' are displayed based on the personal information of the user. Such personalized targeted advertising collects personal information using cookies stored by the browser, but tracking user behavior even after leaving the website is a problem from the viewpoint of privacy. It has been.

Many people want to avoid targeted advertising and take advantage of extensions that block third-party cookies. However, Sankin did the opposite, removing everything that 'blocks the targeting of advertising companies.' In other words, advertising companies made sure they knew what websites Sankin visited and what content they saw.

Then, six months later, when the advertising company got enough of Mr. Sankin's data, he tried to run AdChoices, a self-regulatory program for interest-based advertising, to stop collecting data from the company. AdChoices was launched by the Digital Advertising Alliance (DAA) in 2010 and allows more than 100 advertising companies to 'opt out of personally targeted advertising.'

To use AdChoices, first access the following. The status check will start automatically when you open the page. 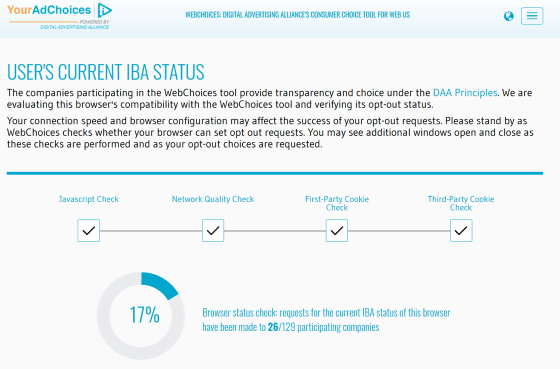 After checking, you will see a list of companies involved in targeted advertising, as shown below. You can opt out by checking individual companies, but if you want to opt out of all of them at once, you can press the button surrounded by the red frame. 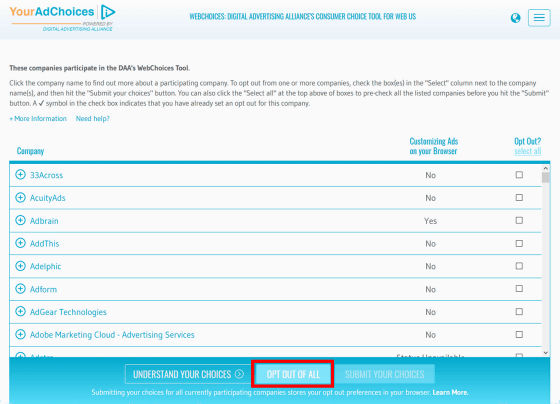 If you press the button and wait for a while, the following screen will be displayed. However, when Sankin first experimented with Firefox, he should have sent requests to 129 companies, but only 91 companies succeeded in sending requests, and the remaining 38 companies 'temporarily have technical problems. Was displayed. 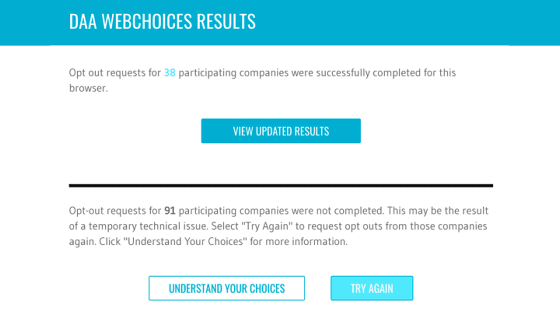 According to a suspicious investigation by Mr. Sankin, DAA's AdChoices did not attempt to 'block user information' for advertising companies, but added a new cookie to the user's browser. This cookie tells DAA participants 'Don't serve targeted ads based on previously collected user data,' but technically it is possible for companies to continue collecting data. In this regard, DAA's Lou Mastoria argues that 'many companies stop collecting personal information because it is easier to stop collecting it than to classify the collected data.'

On the other hand, Chrome does not block third-party cookies by default, so after repeating opt-out requests several times, it seems that 125 companies finally succeeded in opt-out. For four companies, Adstra, LKQD Technologies, Marchex, and Pulpo, who couldn't opt out to the end, Mastoria described it as a 'system synchronization problem.' 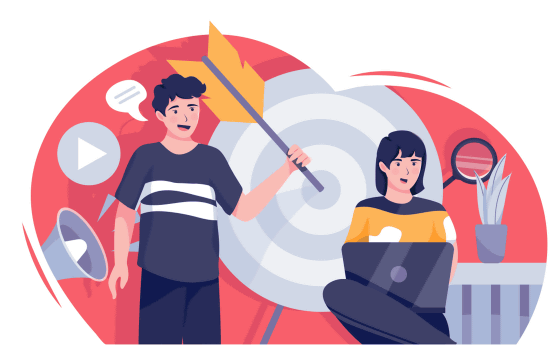 The design of such Ad Choices has long been a problem. In addition to the Firefox issue of 'unblocking third-party cookies and accepting more third-party cookies' to opt out of targeting, deleting all cookies also deletes DAA cookies. I also have the problem that opt-out requests return to a blank slate. 'The current opt-out system for targeted advertising doesn't make much sense.' 'We need to design an opt-in system rather than an opt-out,' the researchers point out.