Octopus is known to have a very high degree of intelligence, and in particular, it is said that it is so developed that there is a research result that its legs are 'distributed networks with independent CPUs'. It turns out that. Regarding such octopus legs, Mr. Tal Shomrat of Israel's Ruppin Academic Center and others announced a new research result that 'octopus can sense light only with its feet', and the octopus's feet have a special detection. It has been shown to have the ability.

Octopuses can feel light with their arms | Live Science
https://www.livescience.com/octopus-sees-light-with-arms.html

The fact that octopus legs respond to light has long been known. Octopus skin melanophores covered with pigment cells, called, etc. by the cells in response to stimulation of the surroundings such as light, octopus will alter its body color.

Shomrat et al. Originally researched this chromatophore, but the octopus changed its body color even though it was exposed to a strong flashlight on its legs to cause the octopus's body color change. Often there wasn't. In this way, Mr. Shomrat was shining the flashlight many times for the experiment, but at one point he noticed that 'the octopus has a high probability of withdrawing every time it is lit.' So Shomrat and colleagues decided to switch to research on how octopus legs respond to light.

In this new study, Shomrat and colleagues put the octopus in a tank covered with an opaque black tarpaulin and trained the octopus so that only their feet could be found through a small hole in the top. And while the octopus was looking for food with just his feet, he shined a strong light on his feet at random timings. 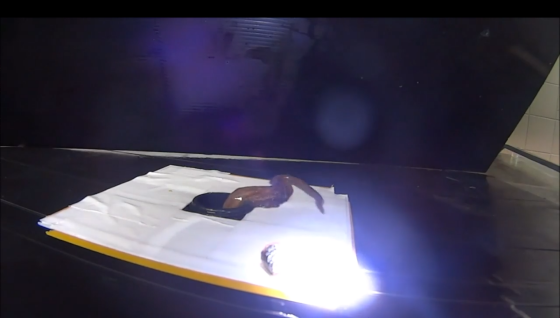 As a result of the research, the octopus withdrew at about 84% of the timing when it was exposed to light. In addition, Shomrat et al. Checked the temperature change with the question, 'Is it reacting to the heat of light?', But no change was seen, so the octopus's legs responded purely to light. I concluded that.

As a next step, Shomrat and colleagues explored how this reaction was triggered. First, illuminate different parts of the octopus's paw to find out the fact that the tip of the paw is the most sensitive.

Next, when the octopus was anesthetized and tested to see if it responded to light, the chromatophore responded, but the action of retracting the foot was not performed. I also amputated the muscles at the base of the foot and tried it, but the foot did not move as well. From the results of these experiments, Shomrat et al. Conclude that 'the foot itself senses light, signals are transmitted to the brain via muscle nerves, and the feet move by sending signals from the brain.' ..

Shomrat and colleagues speculate that the reaction 'may have been acquired by octopuses as a way to protect their feet from predators,' and said they would pursue these evolutionary objectives in depth. ..