The International Space Station (ISS) , which flies over an altitude of 400 km, is a facility for observing the earth and space, and conducting experiments and research using the space environment, and several astronauts are always staying there. In such an ISS, an amateur radio system has been in operation since 2000, and astronauts use their leisure time to communicate with amateur radio stations on the ground.

How to hear the ISS | AMSAT-UK
https://amsat-uk.org/beginners/how-to-hear-the-iss/

First to amateur radio system has been brought to the ISS was the ISS's first long-term stay mission Expedition 1 is started in October 2000 of it. The captain, William Shepherd , brought in an Ericsson radio system and first contacted an amateur radio operator in November.

In September 2020, the ISS wireless system was updated for the first time in 20 years, and it is reported that a wireless system consisting of JVC KENWOOD 's amateur radio 'TM-D710GA' was introduced. Many astronauts staying on the ISS have obtained a qualification equivalent to a Japanese amateur radio license in the United States before boarding, so they may actually communicate using the ISS radio system. .. There are three types of cases where astronauts communicate wirelessly.

◆ 1: School communication (school contact) at a fixed date and time
A project sponsored by ' Amateur Radio on the ISS (ARISS), ' a program that develops and operates equipment for amateur radio stations on the ISS, where children from various countries communicate with astronauts staying on the ISS using amateur radio. Is what you do. School contacts have been held at Japanese schools since 2001, and in January 2021, students from Shiga Gakuen Junior High School and Hisagi Junior High School in Zushi City communicated with astronauts.

◆ 2: Communication with the astronaut's desired partner
Astronauts can also communicate wirelessly with the person they want, and the ARISS operation committee has decided the date and time of communication to meet their wishes.

◆ 3: The same general communication as that done on the ground
School contacts involving ARISS and communication with specific parties are made during the astronaut's working hours, but the astronaut issues a CQ in his leisure time to communicate with the ham radio station on the ground that responded. It seems that there are times. In other words, if you are lucky, you may be able to communicate with astronauts without attending public events such as school contacts.

Astronaut Takuya Onishi of JAXA, who actually served as the 48th and 49th long-term resident of the ISS, also issued a Japanese mode CQ from the ISS in 2016 and decided to communicate with Japanese amateur radio operators multiple times. I am successful. When the ISS radio station performs general communication, the transmission frequency from the ISS is 145.80MHz, but the terrestrial side that responds will perform split operation using 144.49MHz. In general communication with the ISS, it is good manners not to make a call from the ground side, but to always confirm the call from the ISS before answering. An ISS flying at high speed in a low orbit can communicate with the ground only for about 10 minutes over the ground station. Therefore, it is better to predict the timing of the ISS passing over the sky with the

orbit prediction tool released by Mr. Kiyoshi Yasuda, an ARISS operation committee member, and wait for the CQ at the same timing.

The signal transmitted by the ISS is very strong and communication is possible with a typical 144MHz FM transceiver. A transceiver equipped with a helical antenna is OK, but it seems that a quarter-wave whip antenna will give better results. 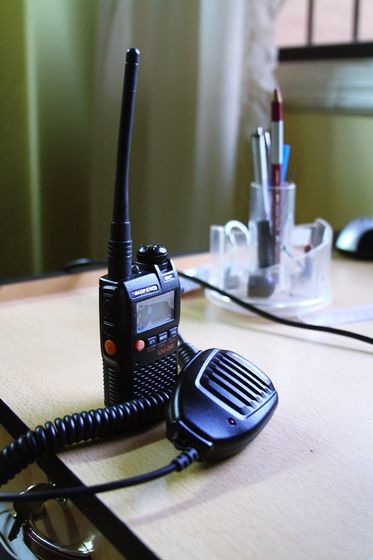 Since the ISS continues to move at high speeds of over 28,000 km / h, it appears to the ground station that the frequency of the radio signal is fluctuating. This is the same phenomenon as the Doppler effect that changes the sound of the ambulance siren, and the frequency increases as the ISS approaches and decreases as the ISS moves away.