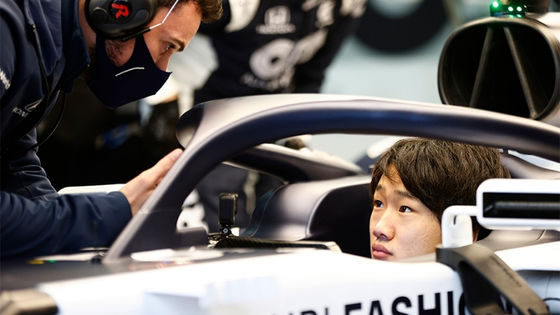 He is a member of Honda's young Japanese driver support program HFDP (Honda Formula Dream Project) , belongs to Red Bull Junior Team, a driver training program of Red Bull, and participated in F2 in 2020 and won 3 wins. It was announced that Yuki Tsunoda will participate in F1 of the 2021 season as a regular driver of AlphaTauri. This is the first Japanese F1 regular driver in seven years since Kamui Kobayashi, who participated until the 2014 season. This is the first time in 13 years since Takuma Sato, who participated in the 2008 season as a Honda program graduate.

In 2021, AlphaTauri will participate in F1.
I am very much looking forward to new challenges surrounded by warm team members. I am deeply grateful to the many people who have walked the road to F1 with me. Thank you very much.
I will fight with all my strength in every race, just like myself in F1 ???? # F1 pic.twitter.com/pheWvqJP5U

Top 10 illusion images that are likely to confuse the brain will be announced, 3 works from Japan also ranked in --GIGAZINE

What if I accidentally refuel an oil fan heater with gasoline? --GIGAZINE

What kind of taste is the fungus 'mycoprotein' tasting review that can be eaten instead of meat? --GIGAZINE

What is a 'bone record' to get 'decay music' in the Soviet Union where rock was banned? --GIGAZINE

How has the computer evolved beyond the Iron Curtain? --GIGAZINE

I should have been trying to make an embroidery for a long-haired cat, but I'm just desperate to become a cat that moves at a tremendous speed. pic.twitter.com/kVX66TFUrv

I made a figure that can grow a cat anywhere by referring to the cat in the picture. pic.twitter.com/Ujnt2oDkye

[Sad news] I am a shrimp researcher, but today I discovered that I am allergic to shrimp pic.twitter.com/xYdlTdOtEX

Requests for 4 or less people ... Prime Minister Suga, Mr. Nikai and others have a dinner with 5 or more people on the night of the 14th.

Chairman Sadaharu Oh 'It was a normal year-end party with the topic of sports and hometown': Nanjii Stadium @ Nanji J Summary

I saw the whole story, but I realized the importance of the bar in front of the convenience store ... pic.twitter.com/gZ5SRPsni8

For those who have a hard time sleeping because their feet are cold even in the futon because it suddenly gets cold.
Think you've been fooled, and at the end of the bath, continue to apply a hot shower for 30 seconds to 1 minute to the inside of your heels and ankles, the inside of your knees, and the crevices of your buttocks.
A good percentage of your feet will get colder and you will be able to sleep warmer until morning. pic.twitter.com/3krsBA65dI

【Notice】
Due to heavy snowfall, the Joetsu Line will not operate all day on December 16 between Muikamachi Station and Minakami Station. In addition, some lines have been suspended or delayed. Even now, there is considerable snowfall mainly in the mountains, and we are working hard to remove the snow. Please be aware of future operation information and weather information. pic.twitter.com/FVJm4BFrIh

In Fujiwara, Minakami Town, Gunma Prefecture, the amount of snowfall for 24 hours until 5 o'clock this morning is 128 cm, and in Yuzawa Town, Niigata Prefecture, the snowfall is 113 cm for 24 hours until 4 o'clock this morning, breaking the past record.
In northern and eastern Japan, it is expected that snow will be intermittent even tomorrow, so please be careful about traffic obstacles. https://t.co/CDEriwklzk pic.twitter.com/HSIu3v9HUA

The Suzuki dealer who happened to pass by was supposed to be amazing ... pic.twitter.com/UUcMiVkLGx

A huge headless Buddha statue was found under the housing complex in Chongqing. Most residents did not know that there was a 9m-high Buddha statue there until the vegetation was removed to rebuild the building. According to a 60-year-old resident, the Buddha statue was built nearly a thousand years ago, and there used to be a temple nearby. https://t.co/IzAfPwwEp5 pic.twitter.com/4QPHh6I9AP

It has been snowing for the first time in Kibune-cho since yesterday, and we have also had snow. Please be careful about your feet when you come to the office.

I burned a lot pic.twitter.com/Y65skLyDCf

It snowed for the first time, but it was too flickering, so I tried to increase it by magic. https://t.co/k5W5hsRJ9f

Is there a change to OSS with GitHub Sponsors-Technology Search

From Yurucamp, Rin Shima has become a scale figure in a cute furisode figure.
With Hamaya and votive tablet in hand, get the 'Shimarin' who is happy with the first visit!

About the use of game records of Osho War | Mainichi Newspapers

[Celebration! ] Always # magic around the game Thank you cheer!
The cumulative circulation of the series has exceeded 15 million! (Including digital version)
In commemoration of this, the 14th volume cover released on January 4, 2021 is released at the fastest speed!
Thank you for your continued support! pic.twitter.com/bnpsJ136rn

[News] Cats' brawl battle game 'Fisti-Fluffs' will be distributed to PCs and overseas Nintendo Switch. All-you-can-eat rampage in a room without a husband https://t.co/5BSLs6Cft9 pic.twitter.com/5Yr0cVurg3

A long time ago, I made one of the copyright-free BGM collections at work. When I thought that it was being used for some time, the cause was this. I am glad that it has been loved by many people for a long time as a nightmare trauma song.

An era is over. Kaito Royale was very popular. pic.twitter.com/Qu5afCnYoL

Live-action version I 'll do it, good pic.twitter.com/Wd1bVWXP14

It's a font ~ ~ ~ ~ (Adverse effects unique to the Japanese version) pic.twitter.com/n63L0YMcBL

Theme box // I like the design of Genshin 's character Mona pic.twitter.com/Fxx7HqgiM7

#Recommended pen #CLIP STUDIO
Here is a list of brushes that I enjoyed and helped this year! Please refer to it! pic.twitter.com/MNwJAUMmn4

When I met Kimoota who was dissipating the rear charge with me of Kimoota, it was actually a beautiful woman (1/4) pic.twitter.com/7KIN3i525M

I drank a lot of alcohol, smoked shisha, and fainted when I got home, so it was morning. This is a picture diary. pic.twitter.com/mph8v1Yq6y

A story about a lily nerd becoming a gal and a lily in the world of lilies (1/5) pic.twitter.com/wIKSBoe44m

I want to be the girl who looks best on the muffler in my class pic.twitter.com/g2uKkDmjfg

It is a story at the time of discontinuation pic.twitter.com/Y5J9GOgPQp

There was a mistake from last night to this morning and it was dented. Meanwhile, I was saved by this word of 'The Chef'. pic.twitter.com/qlNno4uzr0