Is it realistically possible to build a photovoltaic system in space? Konstantin Tsiolkovsky , a Russian scientist who laid the foundation of rocket engineering, has long been a science fiction writer. Only in recent years, when climate variability has become a problem, scientists are moving toward realization. Amanda Jane Hughes and Stefania Soldini, lecturers at the Department of Aerospace Engineering, University of Liverpool, explain about solar power generation in space.

Solar power stations in space could be the answer to our energy needs
https://theconversation.com/solar-power-stations-in-space-could-be-the-answer-to-our-energy-needs-150007

However, the issue of 'how to assemble, launch, and deploy large-scale structures such as solar power generation facilities' remains. A solar power plant that can produce enough energy can require an area of 10 square kilometers, which is equivalent to about 1400 soccer fields, and the cost of launching such a facility with a rocket is enormous. One of the solutions proposed by scientists is to combine thousands of small satellites into one large PV facility. In 2017, a research team at the California Institute of Technology designed a modular photovoltaic facility consisting of thousands of solar panels. The solar panel used in this design is said to be an ultra-lightweight type weighing only 280 grams per square meter.

solar sails have been developed that reflect light and ions from the sun and receive them on sails. The University of Liverpool in the United Kingdom is researching how to make a foldable, lightweight and highly reflective sail with embedded solar cells by 3D printing to make a solar sail that will become a solar power generation facility.

In addition, power generation in space also has the problem of 'how to transmit the generated electricity to the earth'. The most realistic solution is to 'convert the electricity generated by solar power into microwaves and lasers and send them to the ground.' Japan Aerospace Exploration Agency (JAXA) is already conducting research on electric wireless energy transmission technology, and in the practical demonstration demonstration conducted in 2015, electricity was transmitted from a distance of 55 m with radio waves in the 5.8 GHz band. Has been successfully transmitted wirelessly. However, the transmitted power is about 1.8kW and the received power is about 320-340W, so it is just another step toward practical use.

In recent years, research on wireless power transmission technology has become active in China as well, aiming to design an 'Omega' system that aims to transmit up to 2 GW of power to the earth by 2050. In January 2020, Jinko Solar, the world's largest manufacturer of solar panels in China, announced that it would embark on the development of space solar power generation technology in collaboration with China Aerospace Science and Technology Corporation . 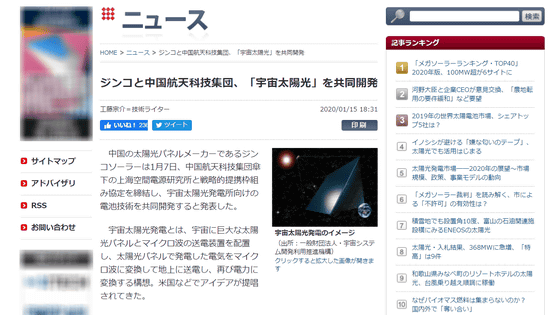 The idea proposed 100 years ago to 'create a solar power generation facility in space and transmit it to the earth' is gradually becoming less of a dream due to technological advances. 'Scientists around the world are spending their time and effort developing solar power plants in space. Our hope is that they will one day be important in the fight against climate change,' said Hughes and Soldini. To be a great tool. '