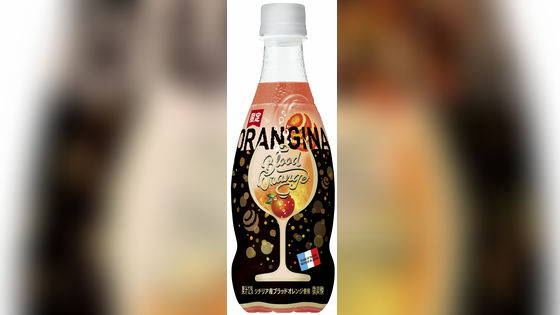 'Orangina Blood Orange ', a new seasonal product of ' Orangina ', will be released on November 17, 2020 (Tuesday). It uses Sicilian blood orange juice, and has a sweet and rich taste with a slight bitterness. The price is 150 yen excluding tax.

How has the 'graveyard' where humans are buried after death changed? --GIGAZINE

'Natural' written on food does not mean what we imagine-GIGAZINE

How to make a 'second earth' where humankind can live --GIGAZINE

Real bookstore photo report finally opened by Amazon, inside is like this --GIGAZINE

Enjoy GYU-DON (gyudon) that is different in Brazil's 'Sukiya' --GIGAZINE

Whether you are interested in camping or not, please take a look at the products here. https://t.co/8B5lk3HDg5 pic.twitter.com/wvLXS03rV8

Enjoy the comics of me and Honda e ( pic.twitter.com/AEhTrTRLEQ)

I'm suffering from not a hotel bath taken by nerds pic.twitter.com/L6rLkctJeq

The NY Times published an article entitled 'Five Ways to Prevent Election Anxiety', which suggests anxiety swirling around the United States, but in addition to 'I don't just watch the news' and 'Walk', 'Take a bath' is mentioned. , 'If you can't do it, watch the video of this capybara that smells of yuzu' and for some reason introduce the video of Nasu Animal Kingdom ... https://t.co/03BnSEhB1K pic.twitter.com/1lebNEYF63

It seems that you can see Trump VS Biden's Stamina Taro single combat at Fuji pic.twitter.com/M3HpIxpx1F

It was the opposite of what I imagined ... Deep-sea squid with an ammonite-like shell is photographed for the first time | World | Latest Articles | Newsweek Japan Official Site

An unknown female candidate won the 3rd place in the Tsukuba city council with 'zero sound trucks and speeches' ... There was a secret plan for 'a graduate of Tokyo University' | Smart FLASH [Kobunsha Weekly Magazine]

New mayor who promises to return 50,000 yen per person To withdraw all savings in the city: Asahi Shimbun Digital

Washington, the capital, is on alert ahead of tomorrow's presidential election. Stores and buildings surround the ground floor with boards in case of post-election riots. It started to increase about a week ago, and now I have the impression that about half of the buildings are like this. The country has been proud of the peaceful transition of power through elections, but many citizens are preparing for riots. This is what it looks like in 2020 pic.twitter.com/D5qHECObfz

'What do you see in the United States in 2020?' Washington's appearance in preparation for the riots after the US presidential election ponders the fate of democracy--Togetter

Underground near the collapse of the road A new cavity can be found in a residential area in Chofu, Tokyo | NHK News

In Tokyo, the northwest wind became stronger from dawn on Wednesday, 4th, and the maximum wind speed of 8.2m / s was observed at 3:18. The Japan Meteorological Agency has announced that Kogarashi No. 1 has blown in the Tokyo area.
Last year, the year before last, Kogarashi No. 1 was not announced, so this is the first time in three years. https://t.co/90CBr5R3bl pic.twitter.com/hYDiB4iQdc

[First snow observation in Sapporo etc.]
On the 4th (Tuesday) today, the strong cold air of December was moving southward, so the rain changed to snow in Hokkaido, and the first snow was observed in Sapporo, Hakodate, Asahikawa, and Muroran.
There are places where it snows even in urban areas today. https://t.co/rFM47p2V97 pic.twitter.com/GCF7bdzavY

Shoji Kokami screams at a 28-year-old woman who laments that she cannot understand the drinking party culture at work. 'Vested interests in the pleasure of a middle-aged uncle' (1/5) <dot.> | AERA dot.

Why did 'Pietro Dressing' become a national district? A story that began with the sharing of a small restaurant --- Meshitsu | Hot Pepper Gourmet

From a mixture of eggs and milk

Adding a mix makes it easier to mix and prevents overmixing (too much mixing makes it harder to swell). It's easy to put the leading mix in the bowl first, but mixing eggs and milk first is a shortcut to happiness and fluffiness! pic.twitter.com/WT1Ca3sVle

I have been asked by my subordinates, 'Why do I need to create the minutes?', So I summarized the minutes in case I was asked in the future. It's hard to get used to the minutes, but I recommend that you take the initiative to create the minutes, especially when you're new to the company, because you can learn how to write sentences and make internal connections. pic.twitter.com/xV0REtbeVD

I heard that the photo of biting bamboo is popular. .. ..
It's not a mouse, but a carnivorous red panda. #Saitama Children's Zoo pic.twitter.com/S89yRLgQLO

Testimony 1 'Morning net may not be available'
I (Is it a WiFi device wakeup failure?
Testimony 2 'Only wired is not good. Wireless is OK'
I (Isn't it strange only in the morning by wire? I'm communicating at night and testimony 3 'When Mr. A (Chinese) comes, I can't use the internet.'
I (I'm dependent on people ... I'm wrong anyway

It has been confirmed that if you set an RFC-violating email address * to an email app with iOS 14 or later, you will not be able to send docomo email (@ docomo.ne.jp).
* If you are using an address that contains two consecutive dots '..' in your address, or that contains a dot '. @' Before the at sign, you cannot send an email. We are confirming.

I noticed only tweets with a strong religion, but is some religion mobilized to write them all at once? pic.twitter.com/UbpAP6XSNN

I was asked to teach me how to easily identify Chinese sellers and Sakura reviews on Amazon. 'The product titles such as' evolved version ',' latest version ',' Reiwa latest ', and the latest, new works, new products, and new releases are prohibited from being written in the basic title, so the Chinese seller who does not follow the rules is doing that. There are many. ' Pic.twitter.com/lKL8ZMuInv

There was one drama in the review of Google map of Kobe University pic.twitter.com/BwVHRUFObp

On the official website, the comments of the main staff including Mr. Ono and Mr. Sasaki are released! !! Https://T.Co/i6hGXJX3Kb # monster Incident pic.twitter.com/UJaBpojEVw

Painful News (No ∀`): 'Demon Slayer: Kimetsu no Yaiba' The entertainer voice actor unnecessary theory that springs up with a big hit 'Why is a stick-reading entertainer appointed?' --Livedoor Blog

'What kind of robot is often seen in anime but not easy to maintain?' → From an engineer's point of view, I hate such robots too much --Togetter

I thought about my favorite Uncle Jam's plain clothes pic.twitter.com/jZWfYq9Tl8

#Anime that can be recommended by non-voice actor appearance
Combat Fairy Yukikaze pic.twitter.com/5BzPyBs2Su

I like the development of a gentle world where the magazine group and the book group care about each other over the 9 volumes of Chainsaw Man pic.twitter.com/xmYaKNI8z2

The one I mentioned earlier has been uploaded. pic.twitter.com/rFF5lKA1jk

This is a life hack for drawing fatigue that I learned on Twitter many years ago. I can't draw without this. Because tights are a hot topic. pic.twitter.com/gw4AvYmBCs

I laughed aloud. The National Consumer Affairs Center of Japan is a tough job. https://t.co/mx5HlqS1JO pic.twitter.com/aRHm5MTz6c

#Tezuka Osamu's birthday
･ ･ ･ Because Mr. Tezuka, who was alive, really made such a statement. It's not my delusion.

That's why a fictitious Zoom talk !!
Thank you very much for your help! !!
Please keep an eye on us! !! pic.twitter.com/v3R1vQoNZ5

Hide your head and do n't hide it #Good ass day pic.twitter.com/ZYXOhbYd1h

In addition, Hideaki Anno (planning and script) and Shinji Higuchi (director) commented on the statue (standing statue) that was unveiled today.

'Do you cut your legs to participate in Para?' Wheelchair basketball / Ripples over qualifications | NHK Sports