'News of the World' trailer starring Tom Hanks, a former military man fostering a strange friendship with an Indian-raised girl A 10-year-old girl who is German but raised by an Indian and can't speak English or German, and a former military man who tells the news of the world will travel together for some reason, and the movie 'Fostering a strange friendship' The trailer for ' News of the World ' has been released. It will be starring

Tom Hanks and directed by Paul Greengrass of The Bourne Ultimatum .

Immediately after the Civil War, the settlements were still not easily accessible to the news, and Captain Kidd was walking across the town to read the world news.

Captain Kidd travels from town to town in the wilderness with a horse.

'I've never heard of a man like you. Tell me a story,' he is curiously asked during the journey.

However, at the beginning, it seemed that he was wearing well-tailored clothes, but Captain Kidd's life was never rich.

While moving through the forest ...

Blood is flowing around.

A suspicious figure there.

It was a girl who was running away.

'I'm not going to hurt you, do you understand English?' Asked Captain Kidd ...

Despite her European appearance, the girl can only speak Indian language.

Ignore it and start walking.

Captain Kidd decides to protect the girl because she cannot leave the defenseless girl in the forest.

Johanna considers the Indians to be a family, and Captain Kidd embarks on a journey to bring Johanna to his 'family.'

'She needs a smile and a dream.'

I can't communicate with Johanna who doesn't understand the language. 'I'm the captain, you ...'

When I pointed to Johanna, I wondered if I could do any harm, Johanna quickly escaped.

I turn away and don't try to get along.

Johanna is free to pick up the captain's luggage.

Find the photo from inside.

With that said, Captain Kidd missed his notebook without saying much.

Johanna jumps on a horse from a carriage.

To Captain Kidd, who says, 'I can handle horses.'

Johanna may be targeted for sale.

From the attitude of Captain Kidd, who protects Johanna, saying, 'Children are not for sale,' a brawl occurs.

Desperately searching for Johanna who was swallowed by the sandstorm ...

The carriage may fall off the cliff.

News of the World will be released nationwide around Christmas 2020.

In addition, News of the World is based on the novel of the same name, there is no Japanese translation version, but the English version can be purchased on Amazon. 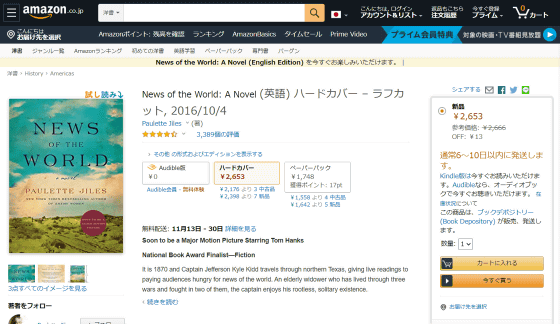 The top reviews are as follows.

Following the result of the Civil War, which ended with a victory in the north in 1865, the Fifteenth Amendment to the Constitution of 1870 gave blacks the right to vote (ironically, more women got the right to vote. Later in 1920).
In the west pioneer era, Texas had many lawless areas, and there was an immediate instability between supporters in the north and supporters in the south.

Captain Kidd, a 70-year-old veteran, travels around the countryside to read news gathered from around the world. The news that Capt. Kidd chose to read was not only informative, but also a rare entertainment for the residents of the settlement, where newspapers were hard to come by.

In the area he was visiting for news reading, Kidd was asked to take a white girl rescued from the Indian Kiowa tribe to his relatives. His parents, who were German immigrants, were killed in an Indian attack, and only Johanna, then six, was kidnapped without being killed. Raised by the Kiowa tribe for four years, Johanna has become an Indian and can't speak German or English. He doesn't even understand that he was abandoned by the Indian family and wants to return to his only known parent.

Kidd quietly responds to the difficulties, even though he has a 10-year-old girl who can't communicate and acts according to Indian conventions. Then, a strange friendship grows between the old man and the girl. However, because of his personality, Kidd is forced to make difficult choices ...

The story of News of the World is simple and has few pages.
You might be surprised that such a work became the finalist for the National Book Awards.
However, as I read it, I noticed and impressed with the story and the ingenuity of the sentences that looked simple.

Capt. Kidd's coolness, which is unaffected by religion and thought, and quietly sticks to his ethics, and the relationship of trust that Johanna, who looks wild and sharp, fosters like a comrade, are attractively spelled out for a long time. It is a work that leaves a lasting impression.

The author seems to have investigated the literature at that time in detail when writing this novel. In particular, the report on children kidnapped by Indian tribes is interesting. White children who lived with Indians, even if it was less than a year old, never blended in with white customs and tried to return to the tribe that kidnapped them. Johanna's psychology and behavior are by no means fake.

I also felt lonely that the era of collecting and reading news was about to end with Capt. Kidd's career.
With the spread of social media, even now that fake news is more active than major media, will one day be spelled out nostalgic?