AMD, the chip maker, has announced the Ryzen 5000 series of desktop CPUs with the new Zen 3 architecture. The top model, Ryzen 9 5950X, has 16 cores and 32 threads, and AMD is appealing that it is 'the best gaming CPU in the world.'

The announcement by AMD can be seen in the following movie.


The price of the Ryzen 5000 series is about 50 dollars (about 5300 yen) higher than the previous generation. Also, the CPU cooler familiar with AMD CPU is said to be attached only to Ryzen 5 5600 X. Please note that all processors support DDR4-3200 memory. 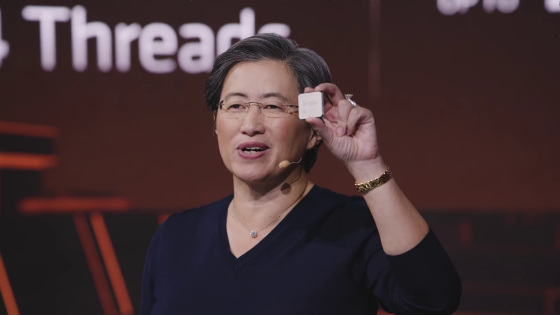 According to AMD, the Ryzen 5000 series, which uses the Zen 3 architecture, has a 19% increase in the number of instructions executed per frequency compared to the previous generation. Also, compared to the competing Intel Core i9-10900K, the performance per power will be up to 2.8 times.

In particular, AMD appeals that the top model Ryzen 9 5950X has the best performance in both single thread and multithread as a gaming CPU for desktop. 'When playing some game titles in 1080p resolution, it's an average of 7% faster than competitors' CPUs, and an average of 26% faster overall game,' he reports. In addition, the 'AMD Ryzen Equipped to Win Game Bundle Program' that allows you to get PC games together is applied to Ryzen 9 5950X, Ryzen 9 5900X, Ryzen 7 5800X, and the digital version of the popular PC game '

'The new AMD desktop CPUs, the Ryzen 5000 Series, range from instruction per cycle, power efficiency to single-core performance, multi-core performance and gaming,' said Saeid Moshkelani, Senior Vice President, Client Business, AMD. We will expand our leadership, 'he emphasizes that the Ryzen 5000 series is the best gaming CPU in the industry.