The tide embankment 'MOSE', which had been delayed in completion while trying to 'save Venice sinking in the sea', finally succeeded in test operation Venice, the Italian city, also known as the City of Water, has been plagued by storm surges and acqua alta for over 1200 years. A trial operation of the tide embankment ' MOSE ' to protect Venice, which had been damaged by flooding of nearly 2 meters in the past, from Acqua alta was carried out on October 3, 2020 at Acqua alta.

Venice holds back the water for first time in 1,200 years | CNN Travel
https://edition.cnn.com/travel/article/venice-flood-barrier/index.html

You can see what the Venetian seawall 'MOSE' looks like by watching the following movie.


A yellow mass rising from the sea. 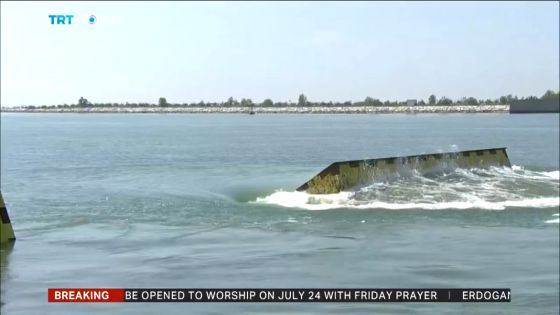 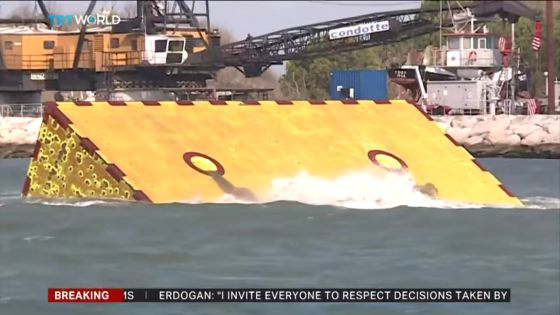 To protect Venice from Acqua alta, MOSE uses a number of blocks to separate the

Venetian lagoon from the Adriatic Sea to prevent storm surges. 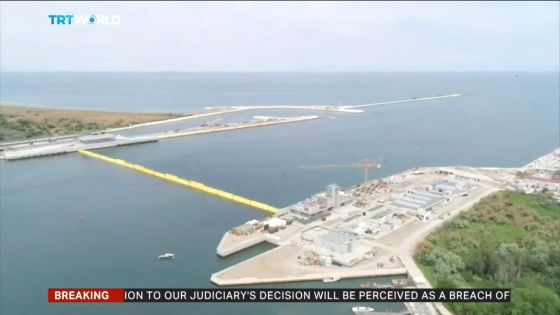 MOSE can prevent storm surges up to 300 cm. 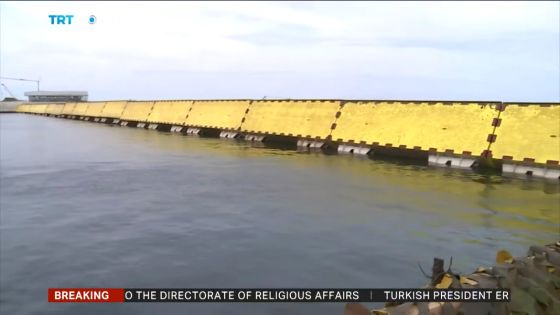 Originally, in Venice, as shown in the image below, seawater was flooding the city so that the ground could not be seen. 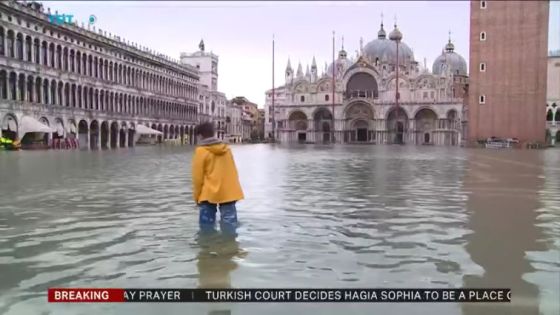 Residents walking on gangways, sidewalks made of iron stanchions and wooden planks to avoid seawater. People living on the lower floors had to evacuate furniture and other items every time Acqua alta occurred. 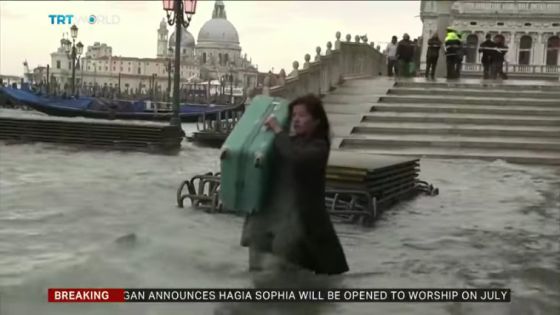 In such Venice, the seawall MOSE conducted a trial operation on the approximately 135 cm Acqua alta that occurred on October 3, 2020. At 12:05 pm local time, when the tide was high, the town, which had been flooded by about 90 cm at the same high tide, was only able to form a large pool in the drainage ditch due to the action of MOSE.

On Twitter, you can also get a glimpse of the surprise and joy of MOSE's success among the residents of Venice. Some people rejoice, 'It's about to reach the peak of high tide, but St. Mark's Square is dry. It went well!'

We almost at the high tide peak and the Piazza San Marco is in the dry! It works! ???????????? #Mose #Venice #Venezia #acqua #alta pic.twitter.com/zBkbsIUiir

Some people couldn't hide their excitement, saying, 'It worked! MOSE stopped the storm surge! I can't believe there is no storm surge and no Acqua alta in Venice today.'

It worked !!!! The #Mose has stopped the high water !!! No flooding no #acquaalta in #Venice today. I cannot believe it. Https://t.co/Gzb0yJ9Kwu #getaguideforthedetails pic.twitter.com/ozVNSyemKC

'Amazing news from Venice. The first Acqua alta of the season stopped at MOSE. It seems that the morning I was cleaning up my luggage from the floor not because of the storm surge, but because of the tidying up. It's scary to have hope in 2020, but ... 'some people say a little negative impression.

Amazing news from Venice today --first acqua alta of the season stopped by the Mose flood barriers. Turns out my morning spent clearing my stuff off the floor just meant tidying, not flood defense. It feels scary to be hopeful in 2020 but ... . pic.twitter.com/7VEuDaVBaS

Mayor Luigi Burgnaro, who watched over the operation of MOSE, said, 'This is a historic day for Venice. Until now, water could flow everywhere in the city and cause great damage for decades. We are very pleased with the success of MOSE this time. We know that MOSE not only prevents storm surges, but also works in bad weather with 19 knots (wind speed 35km / h) of sirocco. I was able to show it. '

The MOSE project itself has been underway since 1984, but the construction period has been extended due to rising construction costs and corruption of the former mayor regarding construction. As the construction period of MOSE has been extended, the frequency and damage of Acqua alta have become more serious year by year due to the effects of climate variability. The Acqua alta that occurred on November 12, 2019 reached a height of up to 187 cm, and almost 90% of Venice was inundated. Due to these circumstances, there were many residents in Venice who did not have a good image of MOSE.

One of them was Serena Naron, a store owner who was hit hard by Acqua alta in 2019. 'I can't believe it. I was very skeptical of MOSE. MOSE Until now, I hadn't produced any results, and it was just a lot of money, so I didn't expect much. ' Federica Michelin, who runs a bar in Venice, said, 'I was worried when I saw the tide forecast, but when MOSE went well, it was between incredible and happy feelings. When I wasn't expecting it. Will be more thankful for things. '

On Twitter, there were some people who didn't expect much from MOSE, saying, 'I was skeptical, but I have to admit.'

Ok, we were skeptic about it, but we have to admit it: #Mose works! #Hightide #venice #acquaalta ???? pic.twitter.com/wQlAvFdikj

MOSE is scheduled to be completed in December 2021, and until then, MOSE will be operated when the tide level may exceed 130 cm. After the completion of MOSE, the standard will be lowered and MOSE will operate when the tide level reaches 110 cm. However, this standard means that Acqua alta will continue to be flooded at St. Mark's Square, which is flooded at a height of 90 cm, raising concerns from residents. In fact, as of October 3, 2020, there was no flood damage, but one day after the MOSE operation, St. Mark's Square was flooded by a storm surge of 106 cm.

In the tweet below, the words '(Aqua alta) is back' and the state of the plaza being submerged in water are posted.