For many years, a research team at Monash University in Australia has been working on a project to restore vision by implanting a device in the brain that sends electrical stimulation to the brain of a visually impaired person. The research team announced on September 14, 2020 that it plans to conduct the world's first clinical trial in humans in Melbourne.

Many people who are clinically 'blind' are unable to recognize what they see because they have damaged the optic nerve , which conveys information from the retina to the brain. Therefore, Monash University Cortical Frontier, which is developing a device that can be implanted in the human brain, has developed a small wireless electronic implant that is implanted on the surface of the brain to restore vision in order to treat patients.

The embedded device, called the ' Gennaris bionic vision system ' developed by the research team, consists of a headgear with a camera and wireless transmitter, a vision processor unit, dedicated software, and 9mm square tiles to be embedded in the brain.

In the Gennaris bionic vision system, the image taken by the camera in the headgear is first sent to the vision processor unit of the same size as the smartphone, and the necessary information is extracted. Subsequently, information is wirelessly transmitted from the vision processor unit to the tiles in the brain, and the tiles convert the image information into electrical signals and stimulate the brain via microelectrodes as thin as hair. By stimulating the brain without going through the optic nerve, many patients who have lost their vision can be treated.

The 9mm square tile embedded in the brain looks like this. You can see that dozens of thin electrodes extend from the surface. 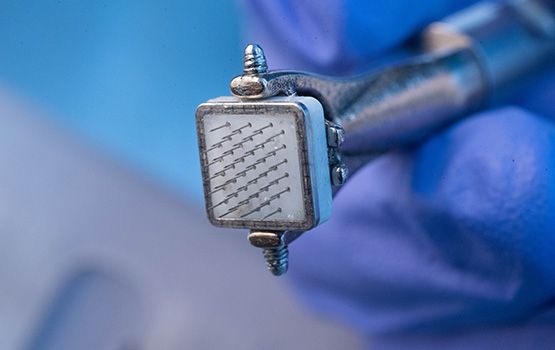 'The purpose of cortical visual prostheses is to restore vision in people who have lost vision by stimulating the visual cortex, the brain region that receives, integrates, and processes visual information,' said Arthur Lowery, a professor of the research team. '. Embedded devices are expected to help blind people understand their indoor and outdoor environment and recognize the presence of people and objects around them.

'These cortical implants are sufficient to advance into human clinical trials and additional investment will enable implants to be manufactured in Australia,' said Marcello Rosa, a professor of the research team. The research team is working with private companies to develop devices and believes that years of research and development will advance Australia's medical device design and manufacturing technology, creating new employment opportunities and leading to economic growth.

In addition, the development and commercialization of devices that stimulate the cortex to restore vision may be applicable to treatments in other areas. 'Commercialization of bionic vision technology has included relief of epilepsy and depression, brain-controlled prosthetics and other important sensory restorations, as well as visual and spinal cord injuries,' said Dr. Yan Wong of the research team. It is also tied to plans to explore further applications. ' 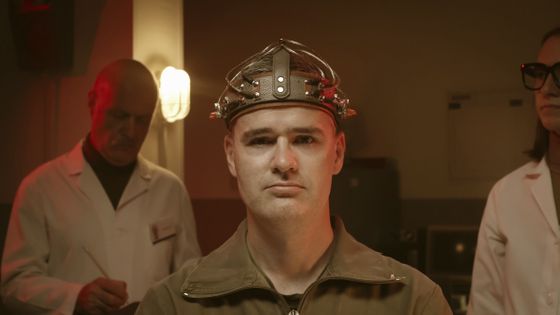 Experiments have already been conducted on sheep to investigate the long-term effects of implanting a device that stimulates the cortex in the brain. A study published in the journal Journal of Neural Engineering in July 2020 found that multiple implants were implanted for up to 9 months, stimulating the sheep's brain for a cumulative total of 2700 hours, but still healthy. No adverse effects were confirmed.

Professor Jeffrey Rosenfeld , the lead author of the study, said, 'The results of this study show that long-term stimulation with wireless devices can be achieved without causing extensive tissue damage, visible behavioral problems, seizures, etc. It shows. '