A type of woodpecker wages a 'large-scale war' over several days, and some individuals watch the course of the war. 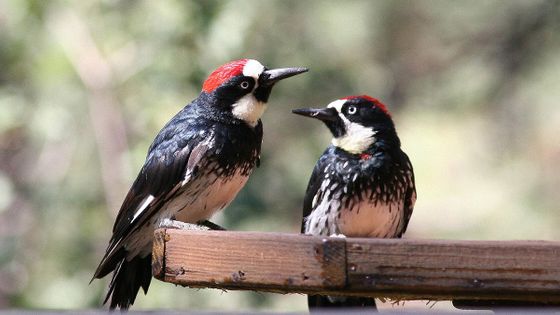 Acorn woodpeckers, which are distributed from North America to Central America, are known for their habit of forming groups and inhabiting forests, making large numbers of holes in dead trees and utility poles, and storing acorns as food one by one. Researchers report that such acorn woodpeckers are engaged in a 'large-scale war' that lasts for several days to a week, and that other herds of individuals may watch the war.

Acorn Woodpeckers Have Multi-Day Wars, and Birds Come From All Around to Watch --Atlas Obscura
https://www.atlasobscura.com/articles/acrorn-woodpecker-wars

Acorn woodpeckers, which live in oak forests, are birds that form a flock of up to 16 birds and take social action. There are multiple male and female mates in each herd, and they act as 'breeders' to raise each other's chicks and cooperate with each other to raise their children. Adult acorn woodpeckers are said to take care of chicks born by members of the herd, even if they are not directly born by themselves, and children who do not yet have their own herd will also help their parents raise their children.

The name Acorn Woodpecker is also derived from the habit of storing acorns as an emergency food when there is a shortage of flies and insects to feed on. Acorn woodpeckers have holes in oak trees and utility poles with their beaks, and acorns are inserted and stored in them, and sometimes hundreds to tens of thousands of acorns are stored in their territory. And, over this 'granary', acorn woodpeckers may wage a fierce war between groups. A research team led by postdoctoral fellow Sahas Barve of the Smithsonian National Museum of Natural History in the United States conducted an observational study of the 'war' of acorn woodpeckers in California. The acorn woodpecker war said, 'If you look closely at the acorn woodpecker, the wings are bloody. During the fight, two birds may grab each other's feet and fall to the ground,' Barve said. It's fierce enough to mention.

Wars occur when all males or females who are 'breeders' in a herd die or disappear from the herd. Just minutes after the individual disappeared from the flock, two or three individuals of the same gender as the one that disappeared came from multiple nearby flock, fighting fiercely until each coalition and one winner were determined. Unfold.

The Acorn Woodpecker war was so fierce that not only did it last up to 10 hours a day, but 12 coalitions fought for five days to a week over a rich granary. It seems that there was also. The battle seems to be very noisy, and you can hear acorn woodpeckers even on soccer fields away from the battlefield, Barve said. 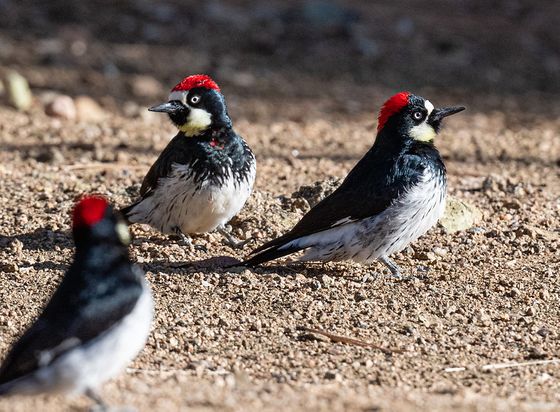 Research has also shown that there are not only individuals who directly participate in the acorn woodpecker war, but also 'spectators' who watch over the course of the war. Some of the spectators took the trouble to fly from a place about 2 miles (about 3.2 km) away and continued to watch the game for more than an hour.

The benefits of watching the war away from their territory are not completely clear. However, the research team believes that acorn woodpeckers may have gained useful information by watching the game.

'Acorn woodpeckers are closely related to everything, such as who lives where, what kind of relationship they have, and where they should live,' Barve said. By observing the appearance of the other herds, he insisted that if the neighboring herds were out of balance, they would immediately form a coalition and start a war.