Microsoft acquires Bethesda Softworks from DOOM and Fallout, future releases outside of Xbox on a case-by-case basis 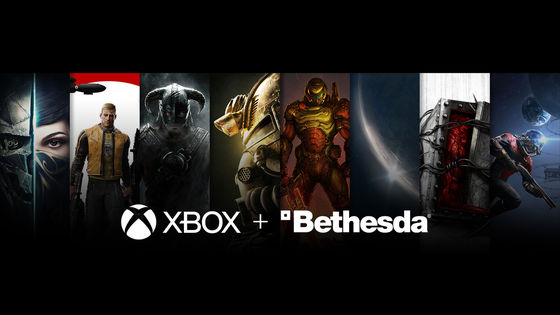 Bethesda Softworks, one of the world's largest game publishers, and its parent company, ZeniMax Media, for $ 7.5 billion. Announced. About Bethesda Softworks, Microsoft is the creator of many acclaimed best-selling games such as The Elder Scrolls and Fallout , bringing an impressive portfolio and commercial track record of games, technology and talent to the Xbox. '.

Microsoft says the acquisition of Bethesda Softworks will increase the number of game development studios in the company from 15 to 23, 'We can add Bethesda's impressive title to the Xbox Game Pass, which is currently This means that Bethesda Game Studios will be able to incorporate titles like Starfield under development into the Xbox Game Pass as well as the Xbox and PC on the release date. ' ..

'Games are the broadest category in the entertainment industry,' said Satya Nadella, CEO of Microsoft. 'People around the world are looking to games to connect, interact and play with their friends. Differentiated by Minecraft and Flight Simulator. Content is the driving force behind the growth and value of the Xbox Game Pass. As a proven game developer and publisher, Bethesda is growing in all categories of games, helping more than 3 billion gamers worldwide. It helps to further strengthen our ambition to give. '

With this acquisition, popular series such as The Elder Scrolls, Fallout, DOOM , Quake , Wolfenstein , and Dishonored will be added to Microsoft. 'Today was a thrilling day for us, our employees and our fans. We have been in close contact with Microsoft for decades,' said Robert A. Altman , Chairman and CEO of ZeniMax Media. This deal is a natural development of our partnership so far. Today's winner is our fan. We will continue to develop AAA titles, but Microsoft The scale and game stack will make the game even better. '

Microsoft plans to acquire ZeniMax Media and its affiliates for $ 7.5 billion, and the acquisition is expected to close in the second half of the 2021 fiscal year.

Microsoft will deliver Deathloop and Ghostwire: Tokyo as PlayStation timed exclusives as Bethesda agreed. After that, games will be on Xbox, PC, Game Pass and other consoles will be considered on a case by case basis, @ XboxP3 tells me https: // t.co/kNGt0u8Pn3

Microsoft's acquisition of Bethesda Softworks is unlikely to prevent already announced titles from being released under the PlayStation brand, but Spencer said on a case-by-case basis as to which titles to launch on platforms other than the Xbox. 'Case'. Therefore, new titles by Bethesda Softworks may be sold exclusively on Xbox and PC.