[Obsolete] Keiko Utsumi, a comic artist who has been active for 81 years as the 'oldest entertainer in the field' died 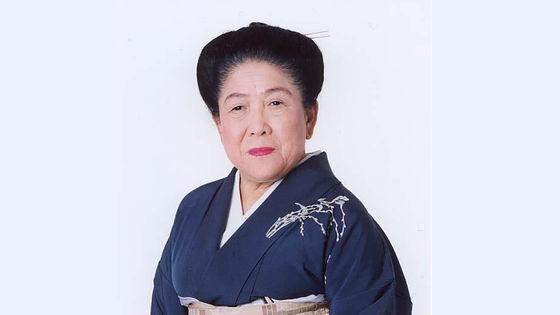 Active as a manzai combination 'Keiko Utsumi/Yoshie' for nearly half a century, he married a manager who was 24 years younger at the age of 77 and started Twitter after he was in his late 80s.

Keiko Utsumi, a manga teacher who continued, died at a hospital in Tokyo due to multiple organ failure. I was 97 years old. 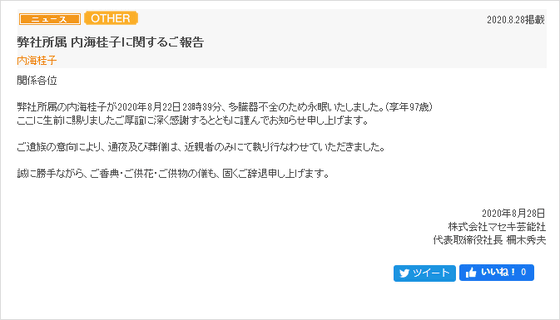 Utsumi was born in 1922 (Taisho 11). While learning shamisen and koto while earning a monthly fee himself, I decided to go to the helper of the entertainer of the entertainer, the Takasago family who was a couple manzai and the substitute of the 〆 child of Matsu and Sparrow family 〆 child (2nd 〆 child ), in 1938, at the age of 16 he took the first stage at Asakusa Tachibanakan.

The combination of the Takasago family Toshimatsu and '2nd generation 〆子' Utsumi was well received, but they were dissolved due to problems between men and women. After that, it was solved by forming a combination with more than 10 people, but due to a relationship, I decided to entrust the married man manzai Koyoshi Arakawa and Hayashiya Senju's 14-year-old daughter Yoshie, and in 1950 the combination Teamed up and debuted as 'Keiko Utsumi, Yoshie'.

'Keiko Utsumi, Yoshie' won the NHK Manzai Concours in 1958, won the Minister of Education Award in 1982, received the Medal with Purple Ribbon in 1989, and won the Medal of the Fourth Prize in 1995. When Mr. Yoshie died of illness in 1997, he returned to the Pin entertainer. In 1999, he married a manager, 24 years younger, when he was 77 years old. Mr. Utsumi has had a child with his companion in the past, but since he was not married, it was also talked about his first marriage at 77 years old.

Twitter started in 2010. At least one case per day was tweeted, and the update was continued until April 14, 2020.