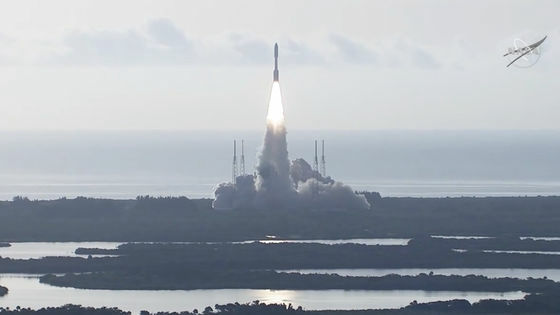 'Perseverance' is an exploration rover sent from Earth to see if Mars has traces of life. Perseverance's mission is to collect surface samples such as Martian rocks and soil and bring them back to Earth, as well as research on the geology and weather of Mars. If the surface sample collected by Perseverance is safely delivered to the earth, it will be the first Mars sample to come to Earth, excluding the Martian meteorite.

Perseverance is a rover about the same size as a small car, and it will be possible to record 23 cameras, a device that observes temperature and humidity and analyze the composition of substances, the first time to record the sound of Mars 2 It is equipped with various devices such as two microphones to carry out the mission. A small helicopter ' Ingenuity ' is installed on the abdomen, and if it succeeds in flight on Mars, it will be the first helicopter to fly on an astronomical object other than the Earth. In addition, Perseverance is equipped with a robot arm, the tip of which is equipped with a microscope 'SHERLOC' and a recording camera 'WATSON', an X-ray spectrometer 'PIXL' for analyzing the composition of surface samples, etc. It has been. In addition, the underground radar 'RIMFAX' developed by the Norwegian National Defense Research Institute to search for underground ice and salt water, temperature, wind direction, wind speed, atmospheric pressure, humidity, radiation, dust particle shape provided by the Spanish Center for Space Biology. 'MEDA' which can analyze such things, 'MOXIE' which is an experimental device for producing pure oxygen from Martian atmosphere, 'SUPERCAM' which analyzes chemical composition and mineralogy, three-dimensional image taking and surrounding topography of the rover body For example, 'MASTCAM-Z' used for analysis.

We're on our way to Mars – me and the almost 11 million names I carry. One home behind us, and a new one ahead. #CountdownToMars

NASA successfully launched Atlas V equipped with Perseverance from the 41st launch facility of Cape Canaveral Air Force Base at 7:50 on July 30, 2020 local time. You can check the launch situation in the following movie. After that, at about 9 o'clock local time, the control center of the Jet Propulsion Laboratory (JPL) received a signal from Perseverance that flew out of the atmosphere, ``This is JPL's deep space network to Mars. It's showing that we've connected to a spacecraft on the way,' said Omar Baez, the launch manager.


'The launch of Perseverance marks the beginning of a new historic exploration mission,' said NASA Secretary Jim Bridenstin. We are all the best in helping this amazing exploration rover overcome challenges. We needed stuff, and now incredible science has enabled us to collect Mars samples as well.'

After the successful launch, Perseverance was connected to a huge antenna deep space network with a sensitive receiver, but the communication was initially a mistake. However, Perseverance's official Twitter account said, 'I'm fine and I'm on a journey to Mars. The signal I'm sending may be too strong at this stage near Earth. But I'm clearly communicating with teams on the ground. Signal strength is important for us to be able to do so, and it's working wisely on the ground to match my signal strength at the moment,'' tweet stresses that the problem is going to be resolved. ..

I am healthy and on my way to Mars, but may be too loud for the antennas on Earth while I'm so close. Ground stations are working to match my signal strength so that I can communicate clearly with my team.https :// t.co/vLaRxcKomR

In addition, Perseverance is scheduled to land on a crater called ' Jezero ' on Mars on February 18, 2021, and then will carry out exploration missions for about 680 days. Surface samples collected by Perseverance will be shipped to Earth by 2031 at the earliest.