PS4's open world historical drama action 'Ghost of Tsushima', which is full of unusual Japanese love, is full of highlights such as high-speed sword fighting against the limit of human reaction speed and beautiful nature `` Ghost of Tsushima '', an open-world action drama that was developed by the American game studio

Soccer Punch Productions and was based on the ' Genki ' invasion of Japan by Mongolia (Mongolian Empire) in the middle of the Kamakura era, is 2020 It will be released on July 17. This work, in which an overseas game studio seriously made a Japanese historical drama, aims to create a game where you can enjoy a 'real experience as if you had a time slip to Japan in the Middle Ages'. It is a work that you can fully enjoy in the open world the sword action full of feeling and the beautiful and even scared nature of Tsushima. Since I had the opportunity to play such 'Ghost of Tsushima' a little before the release, I tried to see what kind of game it is actually, and I was surprised at the quality and the extraordinary love of Japan more than Japanese people. I could feel it everywhere. It should be noted that, 'Ghost of Tsushima' is ' CERO: Z (more than 18 years of actual object),' but is the work of, and in the article 'CERO: Z (18 years old or more real object)' to the appropriate representation is not included Hmm.


This is Hitoshi Sakai, the main character. You will be forced to fight a large army of Mongolian empires with little or no support. However, Jin, a genuine samurai, said to his ally's suggestion for darkness, 'Isn't he proud?' 'I'm not going against the morals!', and stepping out in front of the enemy, 'Come on!' 'Demons!'

The operation method is as follows. What's interesting is that there is a 'single striking' command, and when you press this button at a specific timing, you can challenge the enemy soldier to single striking. Also, because the “audio” setting on the setting screen looks like a shakuhachi Hitoshi, there are “Japaneseness” and “samurai-likeness” lurking throughout the UI, so look for it. It's also fun. 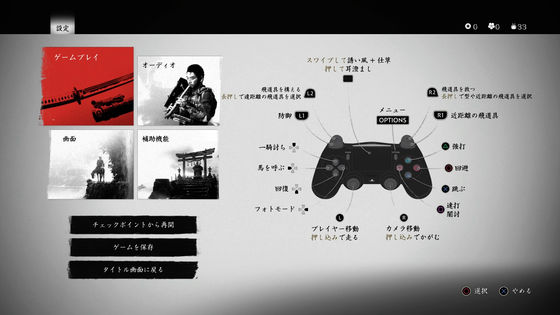 The screen looks something like this, and during battle, a red physical strength gauge and a power gauge indicated by a yellow circle are displayed at the bottom left of the screen. In addition, almost nothing is displayed except the physical fitness gauge and the energy gauge, so there is almost nothing that impedes the sense of immersion in the game. 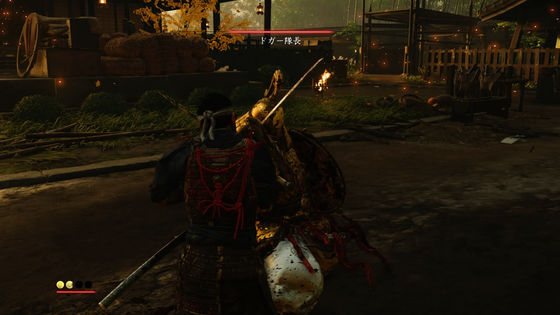 In battle, basically you will guard or avoid in accordance with the enemy's attack, and you will attack by intermixing fast and strong hits, but you should be careful that the enemy's weapon is as follows. The moment it glows red. Only this attack cannot be guarded, so it is necessary to avoid it, and depending on the enemy, you can make continuous attacks that cannot be guarded.Therefore, it is necessary to firmly observe the enemy's movements and take a '

back end ' firmly. There is. It is also possible to acquire multiple types by advancing the play. By using different types in battle, you can efficiently defeat various types of enemies. 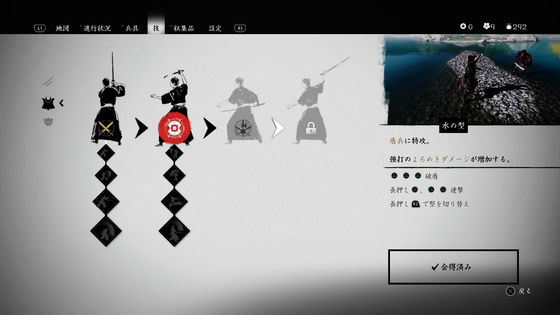 Even if you play a little, you can see a considerable commitment to the battle scene, but Chris Zimmermann, the co-founder of the developer Soccer Punch Productions, also stuck in the battle in

the interview on PlayStation .Blog Is talking.

Basically, all the movements in the sword fighting scene of 'Ghost of Tsushima' are based on the motion-captured movements, so they faithfully reflect the actual human movement speed. However, it seems that the actual movement of human beings was so fast that the player could not react to some attacks. Although there is no problem as long as the player's operation of Jin is fast, it seems that it was necessary to devise it so that the player could react to the attack of the enemy Mongolian soldier. According to the development team, the player's reaction speed has a limit of about '0.3 seconds', but he noticed that there is no limit to 'predicted speed' for predicting when the enemy will attack. , It is said that he succeeded in reproducing the tense sword-action action like a historical drama by making adjustments to give the player time to react to the first attack before the enemy starts a series of attacks.

You can see what the intense swordplay action scene boasting of 'Ghost of Tsushima', which was created with a deep commitment, is finished by looking at 6 minutes 55 seconds after the following game play movie.


At the center of the story of 'Ghost of Tsushima' is 'Genki' and 'Conflict' in the heart of the protagonist, Hitoshi, who resists Mongolian soldiers. In the battle with Mongolian soldiers who are proud of overwhelming force, Jin is an honor to defeat the opponent even with dirty hands such as 'dark attack', which is contrary to the path as a 'samurai' that he has built up until now. (Homa) I will encounter a scene where I have to fight as 'Kurudo' without Rena. Because Jin's conflict is carefully drawn through past recollections, various characters, subquests, etc., this work faithfully reproduces the historical drama not only as an action but also as a drama. Whether you have to throw away the most important things as a samurai in order to protect your own important things, or if you can leave the Mongolian empire while maintaining the pride as a samurai, whether the end of the story of Hitoshi is actually Please play and check.


'Ghost of Tsushima' has more than just sophisticated action and a profound samurai story. What I was surprised at when I actually played was the beauty of the images, and the beautiful and sometimes scary nature of Tsushima attracts players anyway. Bright red autumn leaves...

One side of the yellow ginkgo forest. The fog and Susukinohara can be combined to create a fantastic landscape as if it were the boundary between this world and that world. The lighting is also excellent, and the familiar scenery shows a different expression depending on the Asahi…… 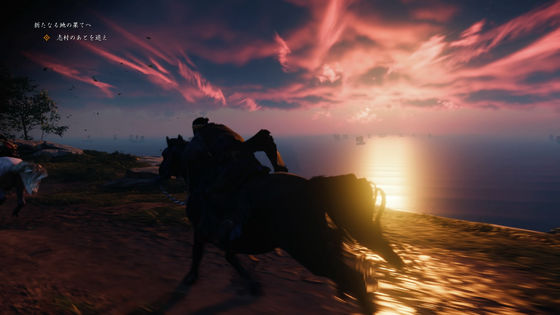 When the sun sets, it creates a terrifying atmosphere, and you can see various faces depending on the time even in the same landscape. It is an open-world action game that allows you to freely travel through Tsushima, so you can take a carefree journey while being soothed by the beautiful nature. Regarding the nature of Tsushima in the game, Joanna Wang of the environmental art team said, 'The 'Tsushima' of this work is not a reproduction of the actual Tsushima, it is like a love sentence from us to Tsushima. Although we incorporated many elements from the above, we also created an original “Tsushima” of this work by combining ideas inspired by the climate of mainland Japan,” he

said in an interview . Other than this, respect for Japanese culture is hidden everywhere in the work. For example, there is 'Kurosawa mode' in the 'Screen' of 'Settings', and if you change it to 'Yes'... 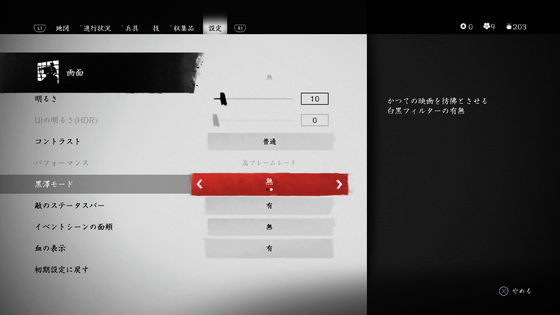 A black and white screen reminiscent of

Akira Kurosawa 's Japanese movie. For those who want to enjoy the game more historically, we recommend that you set Kurosawa mode to 'Yes'. 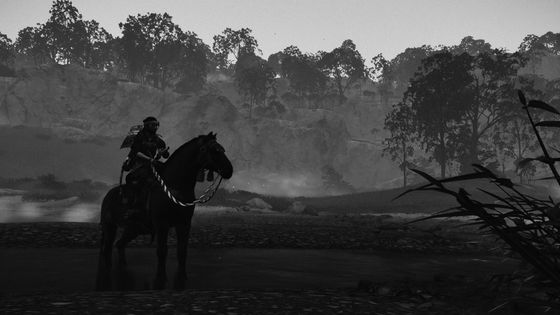 In addition, the historical movie movie trailer of 'Ghost of Tsushima' has also been released, and you can see how this work was made aiming for 'playing historical drama'.


In 'Ghost of Tsushima', the text and UI displayed on the screen have been minimized in order not to impair the feeling of immersion in the game. Even so, in order to keep track of where your next destination is, 'wind' invites Jin to your next destination. Regarding the role of this wind, Mr. Wang said, 'Remember the historical drama movie of the past. Two samurai face each other in the grassland and lift their carp mouth (the part of the mouth of the sheath) and stare at each other. In the silence, as if all the movement had stopped, the grass shook, the leaves flew in the air, the kimono fluttered in the wind, and eventually rain fell from heaven. Hitting the ground. In this way, as the tension increased, the surrounding scenery created a sense of tension, and I wanted the user to feel the moment of the historical drama by contrasting static and dynamic.” It is said that it not only leads to, but also plays a role in creating a tense atmosphere of a period drama. 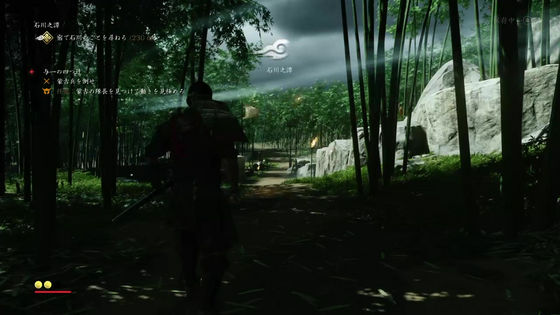 In addition, animals that live in the magnificent nature of Tsushima may guide the ren. At the destination you can get items, you can instantly press multiple buttons to 'bamboo split' ... 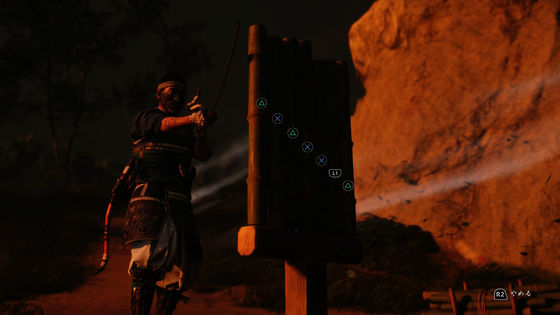 Heal the battle wounds with a secret bath...

When you play 'Ghost of Tsushima,' you can see the intense and sharp sword action that was created based on the Japanese historical drama, the wild nature of Tsushima as if the four seasons of Japan were jammed, and the bold story that depicts Bushido that honors the honor. I notice that there is a respect for Japan everywhere in the work. Playing 'Ghost of Tsushima,' which feels love for Japan more than any other Japanese game, makes me proud of being a Japanese person, and is interested in open world and action games. It was a work that I want all Japanese people to play, not just people. 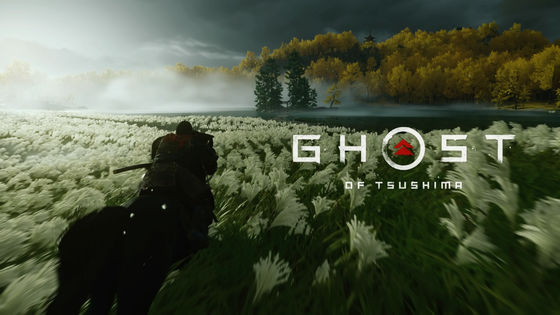