What was the true identity of the people who made the noise that a mysterious gel-like object was found on the other side of the moon? Since the moon always faces the same side of the earth, the only way to find out what is behind the moon is to send a direct probe. Scientists of the Chinese space development authorities have revealed the identity of the 'mysterious gel-like object' discovered by Rover Exploration Rover on the other side of the moon.

Glistening'Gel-Like' Substance on Far Side of The Moon Finally Identified
https://www.sciencealert.com/we-finally-know-what-that-gel-like-substance-on-the-far-side-of-the-moon-is

Launched by China in December 2018, the unmanned spacecraft ' Jeju No. 4 ' landed in the Eight Ken Basin , Antarctica in January 2019, and became the world's first spacecraft to reach the back side of the Moon . Furthermore, in September 2019, it was reported that the mysterious gel-like object was discovered on the back side of the moon due to the success of the lunar exploration rover ``Tama Usagi No. 2'' mounted on the No. 4 It was. 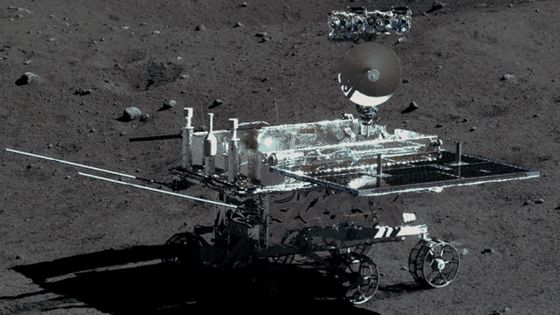 Operation team of 'Tamausagi No. 2' is, in the diary and found a 'mysterious light泽的胶状compound (a mysterious luster'胶状product ')' report was. The Chinese word for 'cold' is commonly translated as 'jelly-like object.' However, since it is unlikely that there is a jelly-like object on the lunar surface, experts at the time of the discovery said, 'If there is something that looks like, it may be a volcanic glass caused by a meteor impact.' Was showing the view.

Furthermore, researchers from the Chinese Academy of Sciences reported in a newly published paper, 'The substance found this time was impact melt boulder rock that shines in a dark green color.' The part surrounded by the red frame in the image below is the place where the 'mysterious gel-like object' was discovered.

Impact melt breccia is a

mixture of lunar regoliths and rocks that have been cemented by being bonded and solidified by a substance melted by the impact of a meteorite. Several impact melt breccias have also been collected as samples in the Apollo program, a manned space flight program by the United States.

This time, the impact melt breccia discovered by 'Tama Usagi No. 2' has a size of 52 x 16 cm, and part of the composition of regolith contained in it is about 45% plagioclase and about 7% pyroxene . It was about 6% of olivine . However, a substance that produces a glassy luster cannot be fully analyzed because the amount of light required for spectral analysis was insufficient, and it was only found that plagioclase was contained at about 38%. did.