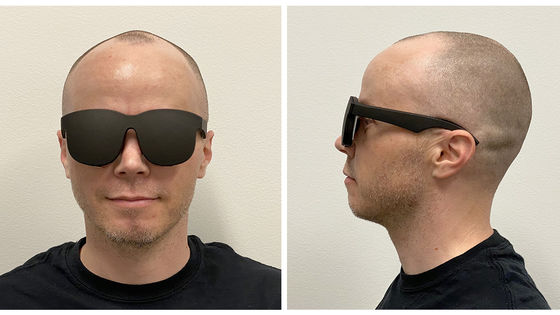 Facebook's virtual reality (VR) research department Facebook Reality Labs announced holographic optical technology for application to devices, overturning the common sense that ``VR headsets are thick and heavy'', it looks like sunglasses We released the VR headset that we did as a proof of concept.

The following is a view of the VR headset, which is a proof of concept from the wearer's side. The display module is mounted inside a sunglasses-like frame.

You can see what kind of scenery you can see with this VR headset by watching the following movie.

Originally, in addition to a display panel, a VR headset requires a plastic lens for projecting the projected image to the eyes. In order to secure the focal length of the lens, VR headsets are inevitably required to have a certain size or more.

However, this time Facebook Reality Labs announced the idea of combining 'holographic optics' and 'optically folding technology using polarized light' to significantly reduce the size and weight of the VR headset. By controlling the light from the image element with a polarizing film, it is possible to reproduce an image with a real depth like a three-dimensional space without using a thick lens. In addition, the VR headset for proof of concept is 9mm thin, but it is possible to achieve a horizontal viewing angle of about 90 degrees wider than HoloLens 2 and Magic Leap One . 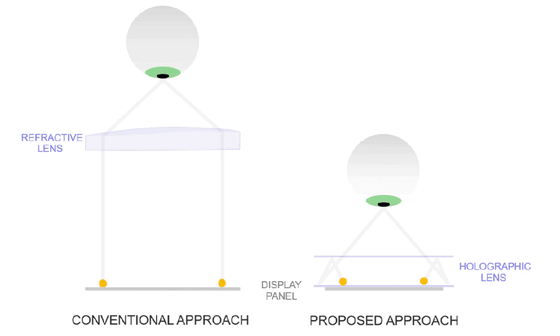 In addition, in the movie, the VR space was drawn only in green, but research and development is proceeding with the goal of drawing the VR space in full color. The LCD (liquid crystal) display of the current VR headset expresses the VR space in the

sRGB color space, but according to Facebook Reality Labs, the prototype of the research display uses a laser light source and can express in a wider color space. It is said that. Facebook Reality Labs says, 'What we're doing at this point is purely research. In a technical paper, we've identified the limitations of the proposed display architecture and what we can do to make this approach more practical. Argued, our research demonstrates the thinnest VR display ever, and we look forward to what the future holds.'