Why should new Corona tracking be done in hardware, not in the app? 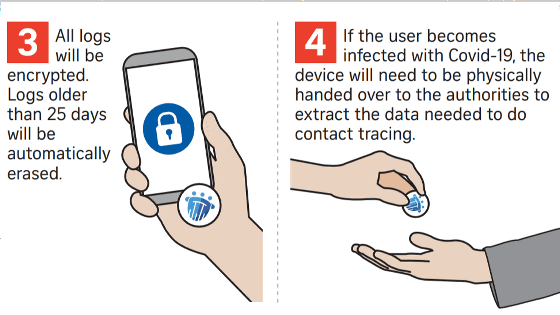 In order to prevent the spread of new coronavirus infection (COVID-19) infection, applications have been developed in various countries around the world that notify people of contact with infected people and track the infection. On the other hand, in Singapore, a wearable device using Bluetooth that does not use the Internet or GPS was announced instead of an application, but

bunnie who was involved in a hardware review of the importance of why it is not an application but a hardware I am explaining.

We have published an application that tracks new coronavirus infected people in various countries around the world, and in Japan the official Japanese government app was released on June 19, 2020, but in Singapore it is not an app but a wearable device for tracking. Clarified plans to distribute ' Trace Together Token '. According to bunnie, who was involved in the review of Trace Together tokens, the idea of contact tracking apps and tokens is very simple.

In the figure below, 'Person1' and 'Person2' exist, and red indicates COVID-19 onset and green indicates onset. Person1 who had already developed COVID-19 and Person2 who had contact with Day1 developed on Day2. As a result, I can see the connection that I infected two more people who came in contact with Day 2. The basic idea of the tracking app/token is to detect the contact between Person1 and Person2 in some way and perform proper isolation to reduce the number of infected people after Day 2.

It looks like this when more than one person is included in the figure. The following shows how Person1 to Person8 are contacted and developed during Day1 to Day5. At this time, Person 1 is a ``super spreader'' that spreads the infection with mild or asymptomatic symptoms even if it is developing, and if follow-up is not performed, 5 people will develop in 5 days, and after 5 days It is predicted that an additional 9 people will develop secondary and tertiary infections.

However, if, for example, Person4 feels unusual on Day 4 and is tested and shows COVID-19 positivity, Person4 is quarantined. At this time, as Person5 to 8 who contacted Person4 afterwards are also quarantined after the test, it is possible to prevent the third infection. Furthermore, by tracking the behavior of Person4, it is possible to find out that Person1, who is a 'contact person' that overlaps with Person2, is an 'asymptomatic carrier'. This kind of tracking can stop the spread of infection.

It should be noted that the two systems, 'contact tracking' and 'contact notification', have different systems. The API published by Apple and Google is a system for 'notifying that you may have contacted an infected person.' This means that when a person comes into contact with a person infected with COVID-19, they will be notified immediately via the app.

However, in the case of contact notification, notification will be sent to Person5 to Person8 when Person4 becomes positive in the test, but Person1 is a super spreader by comparing with the contact range of Person2 in order not to perform 'tracking'. I can't do that. Although notification is also sent to Person1 who has contacted Person4, even though Person1 actually infected Person4 with COVID-19, it looks as if Person4 infected Person1 with COVID-19. That. Since Person1 is asymptomatic, in some cases it may be possible to continue to spread the infection without undergoing testing.

In other words, the 'contact notification' by the API system of Apple or Google cannot clarify the causal relationship, and cannot detect asymptomatic or mildly infected persons. For this reason, Singapore has adopted a “contact tracking” system that reveals the overall picture of the infection.

However, contact tracking systems have the problem of affecting individual privacy. On the other hand, it is the current situation of COVID-19 that if it is not possible to track the contact as a whole, it will affect the lives of people. So bunnie proposed a hardware token called ' Simmel '.

The features of Simmel are as follows.

1: Separation from user data
Separation from the smartphone eliminates the possibility of leaking GPS data and other location information. This makes it difficult to attack the metadata database intended for user data.

2: Data is completely under the control of the user
Because the user physically manages the hardware and the server does not include a third party, no contact data is passed on to anyone unless the user hands over the hardware to the authorities. The user can also erase the history by breaking the hardware.

3: User can temporarily opt out
You can easily turn off the power by twisting the hardware cap.

4: Data randomization
Randomize data at the protocol level to prevent unauthorized use of the data for commercial purposes.

Although it is technically possible to use a smartphone app to perform contact tracking, using the app causes a gap with people who cannot afford to purchase a smartphone. It also limits the ability of the iPhone to run only Apple-approved protocols. In addition, it has been pointed out that tracking through smartphone apps generally negatively impacts user privacy. Bunnie recommends tracking using hardware that is different from the smartphone, because using the app inevitably has something to do with the data on the smartphone.