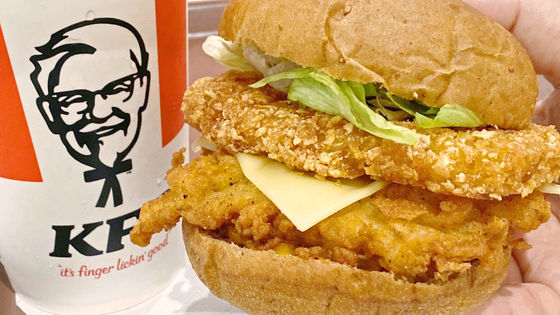 The deluxe version of the popular

That's why I came to Kentucky Fried Chicken. Deluxe chicken fillet sandwich is a menu commemorating the 50th anniversary of Japanese Kentucky Fried Chicken, and it is included in a special box labeled '50th Anniversary'. Deluxe chicken fillet sandwich looks like this. The price is 500 yen including tax. 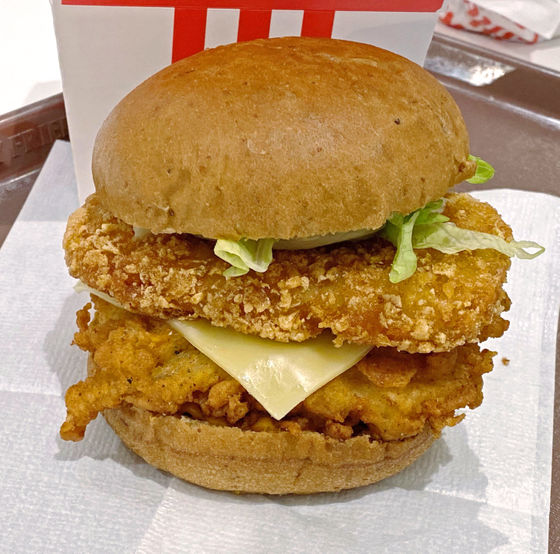 Compared with transportation IC cards, you can see that it is quite thick. Below is what you see from the top. Compared to the normal chicken fillet sandwich (right side), its deluxe is obvious. The buns are rye bread, named after the episode of Deluxe Chicken Fillet Sands, where Kernel Sanders handmade rye bread when he was seven years old to please his mother. Lettuce is sandwiched in the upper row. It depends on the spicy cobb sauce. In the middle is a juicy domestic chicken fillet seasoned with hash potatoes, cheddar cheese, and 11 herbs and spices from the secret of Kernel Sanders. On the underside of the chicken fillet was a spicy cobb sauce. When I tried to eat it, the taste of hash potatoes with crispy batter and juicy chicken fillet, as well as the Mexican taste of cob sauce with spicy chili sauce, matched perfectly. When you chew the chicken, the flavor of Kentucky's special spice spreads in your mouth, making it a taste that won't let you down. On the other hand, cheddar cheese was a little hidden by the rich taste of cob sauce and chicken fillet, which made it a little hidden. 'Deluxe Chicken Fillet Sandwich' can be purchased from June 17, 2020 (Wednesday) at Kentucky Fried Chickens nationwide except for some stores. It is said that it will end as soon as it is out of quantity.