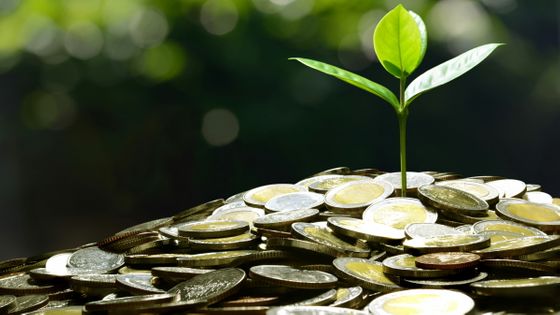 While the pandemic of the new coronavirus infection (COVID-19) has affected many people such as losing their jobs, the government has given all of its citizens the cash they need to live a minimal life. The

basic income to be paid is attracting attention, and movements such as the Pope's suggestion that 'it may be the time to consider the basic income now' are happening. Meanwhile, Jack Dorsey , CEO of Twitter and mobile payment company Square , made a donation of $ 5 million (about 540 million yen) to a nonprofit organization aiming to promote basic income It was reported that 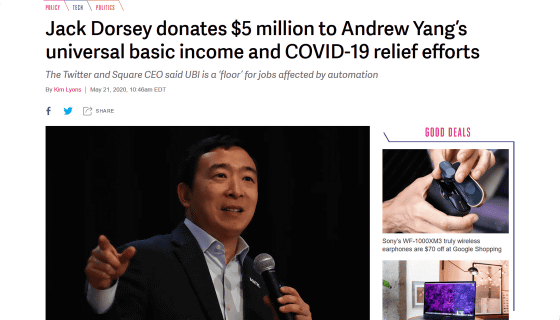 In April 2020, Dorsey donated $ 1 billion worth of Square shares he owns to address the various issues associated with the COVID-19 pandemic, and said, `` Start Small

We have established a charity fund related to COVID-19 . Start Small's activities will continue after COVID-19's problems are resolved, and after the end of COVID-19, it plans to fund a project aimed at promoting the health and education of girls and the spread of basic income, Dorsey said. Is talking.

I'm moving $ 1B of my Square equity (~ 28% of my wealth) to #startsmall LLC to fund global COVID-19 relief.After we disarm this pandemic, the focus will shift to girl's health and education, and UBI. It will operate transparently, all flows tracked here: https://t.co/hVkUczDQmz

Through Start Small, Mr. Dorsey will make a donation of $ 5 million (about 540 million yen) to the organization called ' Humanity Forward ' established by Mr. Andrew Yang , an American businessman and political activist Announced. Humanity Forward is a non-profit organization supporting the spread of universal basic income, and Dorsey's donation was announced in Yang's podcast delivered in May 2020.

The founder of Humanity Forward, Yang, aims to realize a universal basic income that will pay a basic income of $ 1000 (about 108,000 yen) per month to Americans over the age of 18 A person running from the Democratic Party in the presidential election. Although Mr. Yang has gained the support of many people mainly online, it seems that it is wrong to get more support from the supporters based on the results of some preliminary rounds. And with the deadline for the Democratic primary in New Hampshire on February 11, 2020, we have decided to withdraw from the presidential election.

Subsequently, in March 2020, Mr. Yang established Humanity Forward, and decided to continue activities for realizing the universal basic income. The COVID-19 pandemic struck the United States at about the same time, and many workers suffered unemployment and other damage, and Yang's appeal for universal basic income has received a great deal of attention. The $ 5 million donated by Dorsey is a small benefit of $ 250 (about 27,000 yen) through the Humanity Forward to 20,000 people who have been unemployed or financially damaged by the COVID-19 pandemic It will be distributed as. Prior to this, Humanity Forward provided $ 2 million in cash benefits to help the community recover from the COVID-19 pandemic.

In a podcast, Yang said, 'Jack's donation not only directly affects tens of thousands of people in need during the current recession, but also Humanity Forward and I advocate for universal basic income in the United States. We know that Universal Basic Income is possible for all Americans $ 5 million from Start Small demonstrates what can be done for families nationwide Will help you. ' 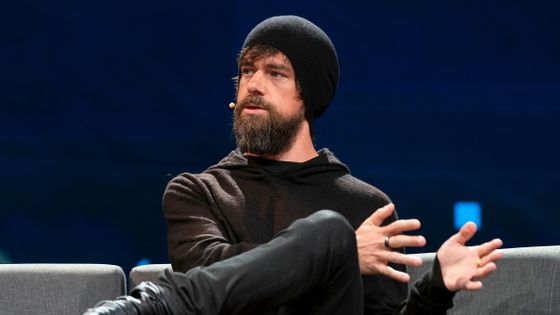 Yang argues that the reason for promoting Universal Basic Income is that the automation of work and advances in artificial intelligence are poised to fundamentally transform the global economy. 'If you're dealing with this historic economic shift, you need to come up with a true solution to help those who respond to it,' Yang said.

'No one is in control of this automation, and no one can stop it,' said Dorsey, CEO of Square, an online payment and e-commerce platform used by millions of small businesses. The move to automate the workforce, such as reducing cashiers and moving to an online-centric payment model, is believed to be further accelerated by the COVID-19 pandemic.

Dorsey believes that Universal Basic Income not only helps people who have lost their income in a pandemic, but it also provides a sort of safety net in a rapidly changing economy. “With all areas under the influence of automation, Universal Basic Income is the floor on which people can stand. People can survive, feed their children, gain knowledge and rest, ”Dorsey argued.