Avatarify, an open source deep fake tool that impersonates others in real time with Zoom and Skype When working remotely from home, we often use online video conferencing tools such as

This Open-Source Program Deepfakes You During Zoom Meetings, in Real Time-VICE
https://www.vice.com/en_us/article/g5xagy/this-open-source-program-deepfakes-you-during-zoom-meetings-in-real-time

Avatarify was developed by programmer Ali Aliev. Below is a demo movie in which Aliev actually uses Avatarify.


Aliev is shown on the webcam. Avatarify is running at the same time as Zoom. When you load your own face photo, the face photo will move according to the movement of your face. 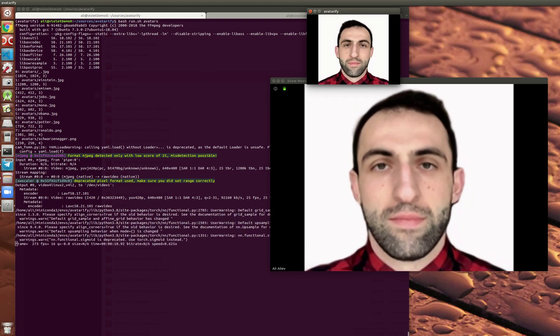 The loaded face photo becomes an avatar and moves according to the facial expression recognized by the webcam. In the demo movie, besides Einstein, Steve Jobs and ... Demonstration of speaking with an avatar, such as President Obama. 
Avatarify is built using the open source code of ' (PDF file) Primary motion model of image animation ' announced in March 2020 by the research team of the University of Trento in Italy. Originally, in order to automatically generate facial expressions with an algorithm, it is necessary to perform training in advance using a data set composed of target images, but Avatarify requires almost no prior training, and automatic facial expression generation is possible. It seems to be possible.

According to Aliev, Avatarify can be used with Zoom, Skype, Slack , but it requires some programming knowledge and some PC specs to install it. At the time of writing the article, it seems that 'A high-spec gaming PC is required to run Avatarify smoothly', but 'It is a matter of time that the operation of Avatarify is optimized for a notebook PC,' Aliev said. I am.

As a matter of course, only a face can be a stranger with Avatarify, and the voice remains as it is. However, regarding this point, Motherboard of the IT news site said, 'Deep fake technology of voice has already appeared . Zoom has a problem that personal accounts are leaked , and if Avatarify and voice deep fake technology are combined, , It could be convincing for account takeover. '