Overseas media reports that Tokyo's house situation is `` too narrow '' and `` 25,400 households live in the same space as refugee camps '' issued a declaration of emergency following the spread of the new coronavirus, calling for a reduction of at least 70% of human-to-human contact and 80% as much as possible. Was. Although Japan's emergency declaration does not extend to the strict city blockades being implemented in other countries, it has been reported that Tokyo Metropolitan Governor Yuriko Koike will request business operators to take leave . In Tokyo, where the number of infected people is the highest in Japan, it is particularly required to maintain a social distance, but overseas media Reuters says, `` Tokyo homes that require standby at home are very cramped if they follow Western standards. ' 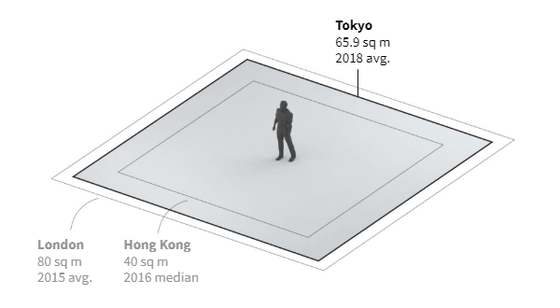 However, this is the average figure in Tokyo and tends to be narrower in apartments, Reuters News Agency pointed out. Regarding Tokyo, Reuters said, 'Like many other cities, there are a lot of small apartments in a large high-rise residential area. To the west of central Tokyo is a greener area with many detached houses. Some houses have a lawn, but many of these houses are next to apartments, and about one in four people living in Tokyo live alone in apartments. ' doing.

According to Reuters, 'The average total floor space per house in Tokyo is 65.9 square meters', it seems to be based on the latest government survey data on housing and land conducted in 2018. In addition, this survey said that it surveyed the housing area of 6.8 million households in Tokyo.

In addition, it seems that 'living space' such as bedroom, living room, kitchen etc. will fit in about 41 square meters of this number of '65.9 square meters'. Entrance, toilet, bath, etc. are not included in this “living space”. 'This may seem incredibly narrow, but compared to other densely populated cities such as Hong Kong, Tokyo's homes are larger.'

However, Reuters has pointed out that there are 1.4 million households living in houses with “living space” of 19.7 square meters or less, and as many as 5.7 million households in Japan. These narrow houses, such as `` old wooden apartments with tatami mats '' and `` new apartments with small kitchens and unit baths, '' are one of Japan's most traditional ways to save space by folding futons and putting them away in the morning. They live with one, 'said Reuters. He pointed out that 75,900 households living in Tokyo had less than 9.8 square meters of 'living space.' 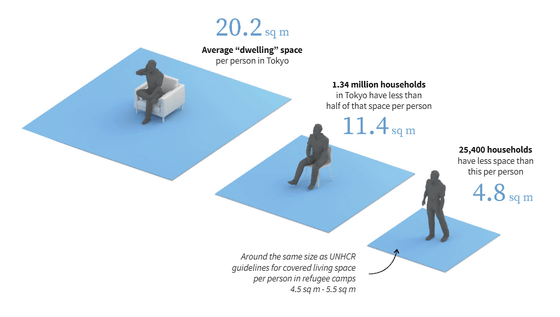 In addition, Reuters has introduced some voices of Tokyo residents who are required to wait at home in the emergency declaration.

For example, an 83-year-old man living in a small apartment of about 20 square meters living in Tokyo said, 'At this point, it is quite difficult and there are not many places to go.I used to go to coffee shops and pachinko parlors so far.' I'm trying to get out of my apartment as much as I can, I'm always reading when I'm at home, I used to play golf, but now many of my friends have died I haven't done that. '

In addition, a 44-year-old man working as a Uber Eats deliveryman while living with his wife and 2-year-old son in a 35-square-meter apartment in Nakano Ward has been completely closed from working as a part-time job or comedian at a curry store. He said he entered. 'I don't spend much time at home because I have to feed my family.' 'People living in small homes in Japan will be more stressed than those living in large homes. I've heard that divorce is increasing as a result of the new coronavirus . '

A 28-year-old woman living with her boyfriend in a 33-square-meter apartment in Nakano Ward said, 'I started working from home yesterday, but until then I commuted to the office as usual. I'm still not sure if I can do remote work well, and recently I bought a Nintendo Switch boxing game, so I'm going to play it in the future, which will increase my time at home. While cooking, I keep in touch with my friends on LINE and Zoom. '