Resale of sanitary materials such as hand sanitizers and masks, which are important as measures against new coronaviruses, is also a problem in the United States. The New York Times of the United States reports on the regulations and laws surrounding the resale problem, and the story of one reseller.

He Has 17,700 Bottles of Hand Sanitizer and Nowhere to Sell Them-The New York Times

When the spread of the new coronavirus spread, some saw it as a business opportunity. Matt Colvin, who lives in Tennessee, USA, is one of them. On March 1, 2020, the first death of the new coronavirus in the United States, Corbin and his brother Noah hit retailers such as Wal-Mart and Home Depot to buy hand sanitizer. Corvin traveled 1,300 miles (about 2,100 km) in three days and bought a hand sanitizer at retailers throughout the region before selling it to Amazon. Mr. Corvin says the sales at that time were 'successful.' Platforms such as Amazon and eBay have begun to address these resale issues. March 4, 2020 Amazon announces regulations on raising prices of sanitary materials that have taken advantage of the spread of the new coronavirus epidemic. Some merchants handling these products have been suspended and have been informed that 'if we raise the price further, we will delete the account.' Similarly, eBay has discontinued domestic sales of masks and hand sanitizers.

As a result, the rising price of sanitary materials dropped at once. The following is reported that the New York Times, 'disinfecting wipes (wet tissue for eradication),' 'hand sanitizer (hand sanitizer)', 'Masks N95 (

N95 mask graph of the sale price in Amazon's)'. The period is from January 1, 2020 to March 7, 2020, and the `` Third-party sellers '' represented by the yellow line rises sharply from late February and then declines Is shown. In addition, this graph is created by Amazon's marketing tool ' JungleScout '. 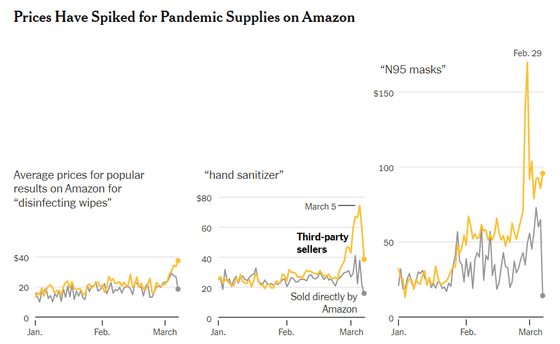 When Amazon announced the regulation, `` Price lifting is not only a clear violation of our policy, but also unethical and illegal in some areas. '' Will prosecute those involved in this evil. ' According to the New York Times, prosecutors in California, Washington, and New York have begun investigating price hikes associated with the new coronavirus, and have searched for merchants who have raised prices by more than 10% after a

declaration of emergency. That it is.

The state of Tennessee, where Colvin lives, also bans 'distributing gasoline and other necessities and services at unreasonable prices in the event of a disaster.' Tennessee prosecutors have told the New York Times that they have sent an investigator to Corvin's home to notify them of the suspension and have begun investigating Colvin's actions. Mr. Corvin said, `` I bought the sanitary material before the emergency declaration, I did not sell anything after the emergency declaration '' `` Sold a hand sanitizer at Amazon for $ 20 (about 2100 yen) The reason is that it costs more than $ 10 for labor costs, Amazon fees, shipping costs and other overheads, '' he said, saying that it did not raise the price, but the Tennessee State Attorney's investigation investigated The decision was made to donate the remaining 17,700 hand sanitizers.