Viruses are said to be 'non-living' because of their characteristics such as 'no cells' and 'no self-propagation'. However, the virus is evolving every day due to the competition for survival, and the definition of the virus is fluctuating due to the discovery of a new virus with characteristics close to that of living organisms.

Clades of huge phages from across Earth's ecosystems | Nature

It is a kind of virus that infect bacteria bacteriophage to, such as the type of characteristic shape, divided into head and tail exists. 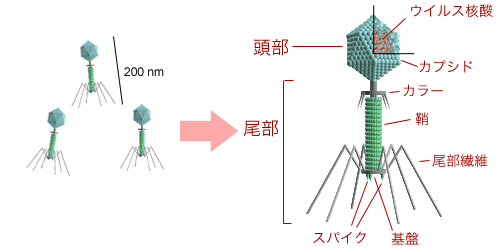 The University of California research team has a large database of DNA from more than 30 different environments, from the natural environment, such as the sea and underground, to the intestines of premature babies and pregnant women. The researchers have identified as many as 351 giant bacteriophages, more than four times the average virus genome. There is also a bacteriophage with a genome of 735,000 base pairs, which is about 15 times the average, and this is said to be the largest bacteriophage at the time of writing the article.

In addition, it was revealed that the giant bacteriophage gene has a gene for a protein essential for the

ribosome , which is the structure by which cells synthesize proteins. 'The presence or absence of ribosomes is one of the criteria for separating living and non-living organisms. Researchers Rohan Sakudeva, co-author of the paper, say that non-living viruses have genes essential for ribosomes. Blurs the line between non-living things. '

It has been suggested that bacteriophage ribosome genes may be capable of manipulating ribosomes in the cells of the host bacteria to make more copies of the bacteriophage protein. 'It is thought that giant bacteriophages were born out of survival strategies. We defined what we called viruses,' said Jill Banfield, professor of environmental science at the University of California and lead author of the paper. It can be considered a hybrid of living things. ' A study published by Mr. Banfield in 2019 reported that some of the giant bacteriophages called Lak phages are present in the human intestine and mouth and prey on the intestinal and salivary microflora. I am.

Although it has not been specified what the effects of a large bacteriophage on humans, Banfield said, 'Human illness can be caused indirectly by bacteriophages. And the ability to move around genes associated with antibiotic resistance, and the larger the genome, the easier it is to move around the gene, which increases the likelihood of carrying unwanted genes to human bacteria. '' Talking.