How has the net slang 'noob' been used to foolish beginners who do not know right or left? 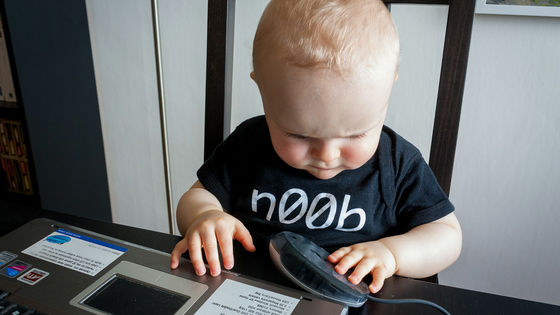 Net slang , a slang used on the Internet, helps beginner players who do not understand the knowledge and rules required in online games The word to do is ' noob '. Inverse of overseas media explains the history of where this word 'noob' was born and how it was used.

`` Noob '' is an abbreviation for `` newbie ( newbie ) '' which means beginner, and The Concise Oxford English Dictionary , an English dictionary that mainly focuses on modern English, says `` Generally participates in online games etc. People who do not perform well because they lack the knowledge to do it. ' The exact origin of `` newbie '' that is the source of `` noob '' is unknown, but it seems that there is a theory that it was first used as a nickname to indicate recruits who fled to the Vietnam War from the mid to late 1900s . Associate professor K.N.Shova of Anna University , India, said that the origin of 'newbie' was derived from the term 'newie' used in the United States and Australia in the 1850s, as well as new students at public schools in England. Introduces the theory derived from the slang of 'new boy' and 'new blood' which means '.'

According to Inverse, the word newbie was first used on the Internet in 1988, before the World Wide Web was invented. Looking at the logs at the time of the online bulletin board `` Usenet '' left in Google groups, Barbara Dyker stated that `` I gathered information as a newbie of the Internet '', making it easier for beginners to start the Internet Call for information to be shared. 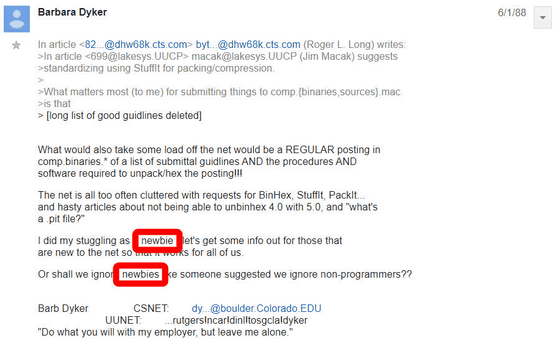 jargon file in, 'in the slang meaning' beginner 'in Usenet, is used in the United Kingdom of public schools and the military' is derived from the new boy, '' and has been written . Dyker used the word 'newbie' simply in the original sense of 'beginner,' but the jargon file describes it as 'a word that insults Usenet users who don't know anything.'

And 'newbie' changes to 'noob' in the hacker culture of the 1990s when the Internet began to spread. At that time, swearing and cursing tended to be removed from online forums, so Internet users began to use 'newbie' instead of 'noob' or 'n00b'. The notation used to change the spelling or replace a character with another character or symbol is called Leet, and in the 2000s it became widely used not only by hackers but also by the entire Internet.

In particular, online game players were the ones who rapidly accepted the 'Noob' and other Lets. The 'noob' section of the Urban Dictionary, an online dictionary that contains a lot of net slang, illustrates the conversation of beginners who ignore the general player's advice and get stuck at the forefront many times. Also, in the first-person shooting game `` Call of Duty 4: Modern Warfare '' released in 2007, a grenade launcher that can do enormous damage to enemies just by releasing it without accurately aiming is called `` noob tube '' It was called.

The meaning of 'noob', which has been used to mock beginners, has changed since 2010. `` The word 'noob' has lost most of its original bitterness on Twitter, saying, 'I just participated in a particular field and have no experience or experience,' 'said Michel Zappavina , a linguist at the University of New South Wales. People without skills '.' They point out that the word noob is no longer a bad word, but used as a masochistic expression.