`` We will continue a free weekly game distribution campaign for 2020, '' Epic Games announced Fort Knight and Unreal Engine provides, PC game of download sales platform ' Epic Games store operated by the' Epic Games has announced that 'even in 2020 to distribute the game of every week weekly for free.' Epic Games has been 'free-distributing games' on the Epic Games store at least once a week since December 12, 2018. The games distributed are

Super Meat Boy , Kingdom: New Lands , The Witness, etc., and the main price is around 2,000 yen. You need an Epic Games account to get, and you need ' Epic Games Launcher ' to play. Free games obtained from this campaign are treated the same as purchased games and can be played at any time after the distribution period.

For example, from January 24 to January 30, 2020, you can get the 2D puzzle game “ The Bridge ” that combines the tricks of Escher and physics. 'What game is currently being distributed' can be checked from the following URL. You can also directly access individual pages of the distributed game. Through a series of free game distribution campaigns, a total of 73 games totaling $ 1,455 (about 160,000 yen) were distributed, and the total number of distributions exceeded 200 million. 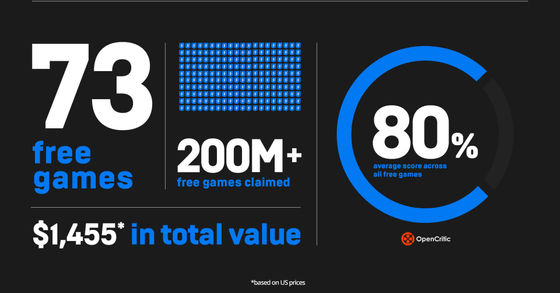 Epic Games exclusive games that will be released within 2020 are `` Predator: Hunting Grounds '' `` Auto Chess '' ` ` Rogue Company '' `` GODFALL '', and many other exclusive games will appear That is.