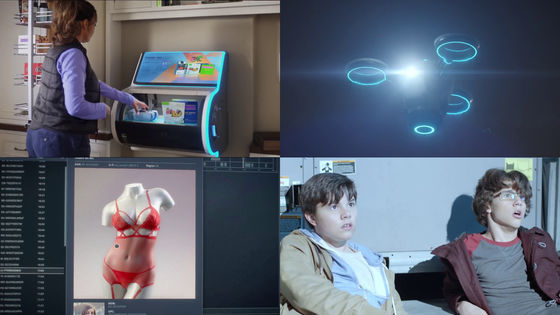 by sister companies of Amazon and Google , and commercialization is a matter of time. A Sci-Fi short film ' SKYWATCH ' depicting two boys hacked in a prank, set in the near future, where such a drone delivery system is completely integrated into daily life, is released on YouTube for free.


The near future where the infrastructure is established so that the ordered items are delivered by drone and can be immediately delivered.

The drone delivery service provided by a company called “NexPort” is indispensable for people.

An uncle sitting on a sofa and watching TV ...

It looks like he ordered a set of burgers.

However, why did you receive a green smoothie?

Someone watching the situation with binoculars

He hacked into the drone delivery system and was tricked into replacing deliveries to apartment residents.

A drone carrying a delivery flies in the sky ...

Arrived at the pod of the apartment rooftop.

I wonder if the green smoothie I ordered from a woman doing yoga has arrived ...

A high-calorie hamburger set came out.

Look through the binoculars with a woman who interrupts yoga and speaks of potatoes ...

“That woman, vegan, got out of the hamburger set!” Laughs, two boys, Sean and Mike, who hacked the drone delivery system.

Mischief to replace the delivery again.

The mother suddenly enters the room and releases an anger.

Boys with frightened faces are likely to be misled by mischief ...

The mother was just calling her work with a wireless headset.

Sean with a relieved face

When a safe microphone returns to your PC, the hacking device displays an error.

It seems that there was a problem with drone flight control.

Hurry up and check the drone with binoculars, the drone fluctuates and flies in the sky ...

Crash on the roof as it is.

Two people get bloody when the drone is broken because of mischief.

If you rush to see the rooftop ...

Discover a crashed drone. It is in a state where it cannot fly, but it is not completely broken.

When Mike checked the drone status from the PC, he discovered an item of interest called “Project_Osprey”.

When the interested microphone ran Project_Osprey, the drone suddenly fired a delivery pod.

The sexy red underwear that was inside popped out ...

However, at the next moment, the drone suddenly shines red and something like a muzzle pops out.

The drone fires smoke screen bullets. The two who were surprised ran away from the spot.

When you look at the drone from the shadow, you are clearly firing a smoke curtain.

“What did you do!” Sean raged.

The microphone panics and remotely turns off the drone.

The drone shuts down, and two people take a break ...

Suddenly it is lit by dazzling light.

A drone appears with the announcement 'I violate NexPort's Terms of Service'.

The drone shines red and points the muzzle toward the two.

Sean, who was a little late, was wrapped up in smoke smoke from a drone.

When I looked back at Sean ’s voice screaming, “Mike!

The moment when Sean is abducted by a huge drone

If you're curious about what will happen to the microphone, please check out the main movie.