The action game “ Donkey Kong 64 ” for NINTENDO64 released on December 10, 1999, was developed by Rare, a major British game development company, in the same way as the Super Nintendo Kong series of Super Nintendo. Donkey Kong 64, 20 years after its release, four developers, George Andreas, Grant Carcorp, Mark Stevenson, Chris Sutherland, who were involved in the development at that time, are on overseas game media GamesRadar + Looking back at the time.

As Donkey Kong 64 turns 20, the devs reflect on its design, the infamous DK Rap, and how a shocked Shigeru Miyamoto created the Coconut Shooter | GamesRadar +
https://www.gamesradar.com/uk/making-of-donkey-kong-64/

In the game industry, there are many cases where past games are evaluated later. Donkey Kong 64 is a game that was released 20 years ago, but many people are still analyzing it in 2019. Donkey Kong 64 is a 3DCG action game developed by Rare, but overseas, it is sometimes said to be the game that caused the NINTENDO64 crash. For this reason, it seems that engineers who have been involved in development have always kept the idea of “if they were doing this” somewhere in their heads for 20 years.

Andreas, creative director at Donkey Kong 64, said, “I'm still taking a different approach. (Now) we're shrinking everything in the game to make it look sharper and less It will obviously change to focus on things, for example, if you integrate a banana system (banana, banana medal, banana coin, etc.) it will be clear that it will be easier for players to play the game, and regular character exchanges `` Not only are there multi-colored bananas, but the collection is only one unified banana, and the complexity should be much better. '' When I think about it, I look back to change the system like this. In Donkey Kong 64, 201 important items ' Golden Banana ' appeared, and you can proceed with the game by collecting them. Although it is not so many when only golden bananas are included, it is possible to collect as many as 3821 items in total, including other items, and this is `` world record '' at the time of article creation GamesRadar + is written.

About why so many items were recorded, Andreas was the co-founder of Rare because the game `` Banjo and Kazooie Adventure '' developed by Rare as well as Donkey Kong 64 succeeded・ It is the influence that Stamper told the development team, 'Please check if there is a lot to collect' to differentiate the game and Donkey Kong 64.

Donkey Kong 64 can play five characters: Donkey Kong, Deedy Kong, Ranky Kong, Tiny Kong, and Chunky Kong. Some players may feel “overdoing”, but by making minor adjustments such as preparing a jet pack for Deedy Kong and making Chunky Kong a blunt power type, It has succeeded in making it unique.

Andreas added, “By adding additional discovery elements (which other characters cannot do) to the new character, we added two things: freshness as a character and elements for finding new discoveries in the game. , One character crossed the area and enjoyed the elements that other characters couldn't see, like 'Oh, what would happen if Chunky Kong was here?' I expected to play the same stage with different characters, 'he said. There are other elements that were necessary to differentiate it from the adventures of Banjo and Kazoo. What really needed to be differentiated was the “Soundtrack” of the game, from which it was revealed that “ Monkey Rap ” was born.

Based on Mr. Wise's soundtrack, Mr. Carcorp decided to create a soundtrack for Donkey Kong 64 from scratch. Carcorp revealed that NINTENDO64's memory (RAM) was 4MB, which was a large capacity at the time, which had an impact on the soundtrack production method.

“We were able to connect the PC running Cubase via MIDI to the development kit via MIDI , so we were able to actually play the sound when composing. 'We did not compress and capture the audio data, we played the soundtrack using the instrument on the machine,' he said. 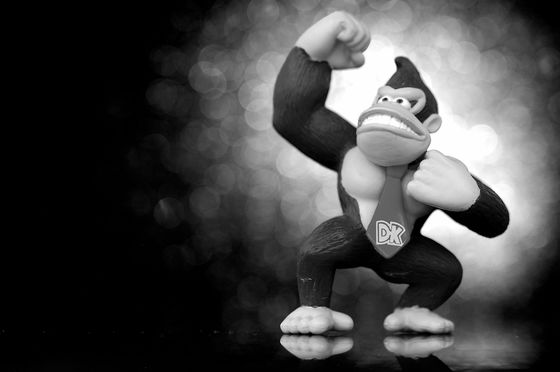 Furthermore, the story behind the birth of “Monkey Wrap”, which has a bad reputation overseas, has also been talked about.

Monkey Rap is a song that was born from a joke that Andreas, Carcorp, and programmer Sutherland spoke at lunch time. “We thought that everyone would be joking (about Monkey Rap), but nobody said that. This is the first time I have written anything negative about my music. Until then, I can be said to have been lucky, because most people liked my songs, so Monkey Rap was supposed to be a joke. ' This is a retrospective of the monkey wrap.

It is a monkey rap that has received a lot of criticism, but at the same time it has evolved into an Internet meme , remixed by DJs all over the world, and used for the sound of the stage based on the Donkey Kong series of the Smash Plazars series.

Sutherland said, “At that time, many people played Donkey Kong 64, listened to Monkey Rap and thought it was a terrible song. However, because many players who actually played the game were children, Monkey Rap should have been nothing more than a fun song, and its evaluation changed as the children grew up and understood the meaning of rap, 'says Monkey Rap being criticized by the public. I guess how it became.

Carcorp said, “It was good to make a monkey rap. I'm glad that people have been talking about this song for years. It wasn't born when I made the monkey rap. Nonetheless, all of my 17-year-old son's friends know the song, which is unbelievable. '

Donkey Kong 64's Monkey Rap can be heard from the following.


The 2D graphics of the Super Donkey Kong series have received a great deal of praise. However, it seems that the evolution from 2D side scrolling to 3D action was a major challenge for Rare. At that time, the sequel title of Super Donkey Kong 3 was being developed with a 2.5-dimensional approach such as the Crash Bandicoot series , but it was canceled in 18 months due to various problems.

Looking back on that time, Stevenson, lead designer, said, “The transition to 3D was a challenge to something completely different because 3D technology was still in its early stages. From an art perspective, Super Donkey Kong I couldn't make anything comparable to the visual elements of the series, creating 3D graphics was an incredible challenge and it wasn't normal to make 3D models operational “I ’m talking about struggling.”

In addition, “I was tasked as a designer who was involved in the development of the Super Donkey Kong series. The 3D model was used to create and move the character from the 2D illustration. I could see it, but it might look great on the game, but it looked terrible at an invisible angle! ”And the difficulty of creating a 3D model from 2D illustrations I am revealing. Andreas also talks with Shigeru Miyamoto , the creator of the Donkey Kong series.

When developing Donkey Kong 64, Mr. Miyamoto at the UK headquarters in the UK, Mr. Atsushi Iwata who was working at the HAL laboratory at that time, and Nintendo America's chairman Howard Lincoln have visited the development site at that time is. Recalling that time, Andreas said, “After turning on the game, watching the opening Monkey Rap, I ran Donkey Kong around in the game. I pulled a shotgun at the push of a button, not a textured weapon that Miyamoto expected, but a real shotgun with bullets popping out and terrifying sound effects. I had put it in as a temporary weapon, but I got used to it during development and forgot to make a new design completely. I saw a terrible expression, and then Miyamoto smiled with paper and pencil , I spoke and gave it to me to draw an illustration of coconut Cannon '. 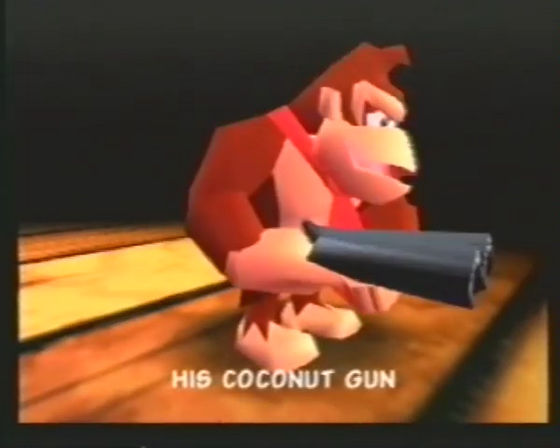 Mr. Miyamoto's impact on the “shotgun” can be confirmed in the Donkey Kong 64 preview video.


Other than that, when Andreas went on a trip to New York after Donkey Kong 64 was released, Andreas said, “I went to one of the toy shops and went down to the basement by an elevator. The game was kept, but there was a monkey rap there, about 100 children and their parents gathered in front of the monitor where the monkey rap resonated. 'I listened with applause. I witnessed the monkey rap bringing joy to my family, so I don't care about the criticism that I have heard since then.'