Coral reefs are dying all over the world due to rising seawater temperatures, and some experts point out that the speed of coral reefs has accelerated and that recovery by nature can no longer catch up . Various attempts have been made to preserve coral reefs that are threatened to disappear, but researchers are now trying to solve the problem by playing 'living coral sounds' through underwater speakers.

Featured news-Sounds of the past give new hope for coral reef restoration-University of Exeter
https://www.exeter.ac.uk/news/featurednews/title_768084_en.html Steve Simpson, a professor of marine biology at the University of Exeter who led the research, said, “A healthy coral reef is surprisingly noisy, with shrimp moving sounds and fish roaring. A young fish looking for a calming place. Will stay in a place with such noise. '

In 2016, a survey conducted by an Australian government agency revealed that 'the majority of the Great Barrier Reef coral reefs are at risk of death .' In response, researchers at Exeter University set up 33 experimental areas in the Great Barrier Reef from October to December 2017. Underwater speakers were placed at the center of each area, and it was confirmed that the sound echoed evenly in all directions centered on the speakers. This area was divided into “locations where live coral reef sounds are reproduced”, “locations where dummy speakers are installed” and “locations where nothing is installed”. 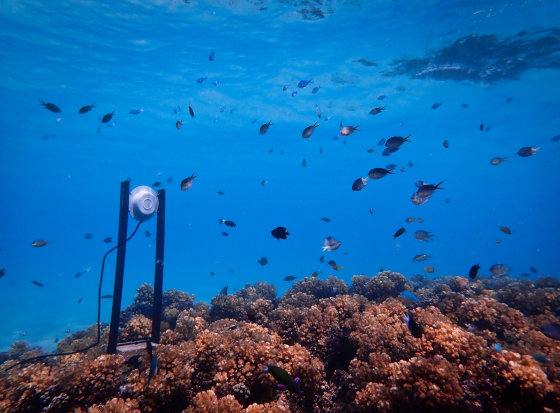 Researchers believe that by doing this on a large scale, coral reefs that have died or are dying around the world can be revived.