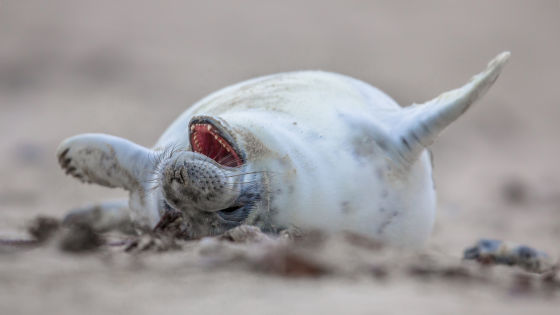 Humans change the volume and pitch of their voices in consideration of the surrounding environmental sounds, but in fact, mammals with such abilities are extremely rare. A new study of baby seals showed that baby seals had similar abilities at 1 to 3 weeks of age. It is believed that deepening the understanding of seals' ability to speak is the key to the evolution of human ability to speak.

Humans can adjust the pitch of their voices to be higher or lower, and they use this ability for communication, but in reality, few mammals have similar abilities. To date, similar abilities have been identified in only a few mammals, including adult harbor seals.

According to Andrea Ravignani of the Max Planck Institute for Psycholinguistics, pinnipeds are closer to humans than other animals in terms of evolutionary development and diversification of speech. For this reason, learning how pinnipeds learn about speech will give them a better understanding of how humans gained speaking ability and became the 'talkative' creatures of our time. He is thinking.

Therefore, Ravignani and his research team conducted a survey of eight baby seals kept at the Seal Rehabilitation and Research Center, a wildlife conservation agency in the Netherlands. The eight seals were 1-3 weeks old, all protected and before being returned to the wild. The research team first recorded the voice of a seal in the Waden Sea, the Netherlands. After that, the recorded voice was filtered by dedicated software to match

the formant (frequency band) when the seal child called his mother. When the baby seals recorded in the facility were heard at a volume of zero to 65 decibels over 45 minutes from three directions, the baby seals naturally responded to the recorded voice.

At this time, it was confirmed that baby seals lower the pitch when the sound of the waves becomes louder, and stabilize the pitch when the noise becomes stronger. Controlling utterances by using the way environmental sounds are heard as feedback, such as raising the voice in noisy conditions, is called the 'Lombard effect' and is performed when a person 'speaks so that others can easily understand'. It is said.

Few mammals gain control of speech in the first few weeks of life, and the findings are rated as demonstrating that seal pups are more controllable than expected. The research team will continue to study what is an important factor in changing the voice of seals.