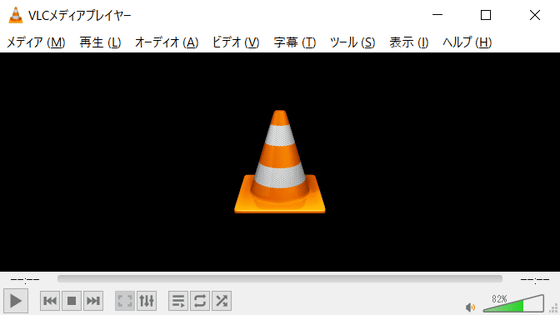 VLC ” is a software for playing video and audio data that can be operated on multiple platforms such as Windows, macOS, Linux, Android and iOS. In 2012 it achieved a download billion times and, in the article creation time download 3,000,000,000 times , such as to achieve, is the VLC has gained overwhelming support, but the beginning was a small-scale project by college students.

◆ Birth as a project by students
VLC was developed by students from Ecole Centrale Paris , a prestigious university in France. Gene Baptist Kemp, who is the lead developer of VLC at the time of writing the article, was also a student who entered the school in 2003, and at that time was assigned a role to support the operation of the computer network about. The student team at Ecole Centrale Paris calls the VLC development project 'Network 2000' and the project started on the server in 1996.

Later, VideoLAN, a non-profit organization that developed VLC through twists and turns, was established, and Mr. Kemp is responsible for the chairman at the top.

VLC is also available in Japanese for free and can be used on Windows, macOS, Linux, Android and iOS. 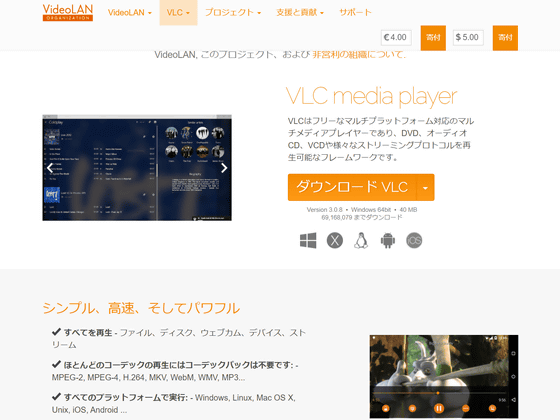 Increment of the media, which summarizes readings related to software development by the team, wrote, “It was clear that VLC was very successful before VideoLAN began counting downloads.” Prior to viewing video content with streaming playback such as Netflix and YouTube, users have few options for media players to play videos and music, and the quality of the few media players is not excellent was.

VLC appeared in a refreshing appearance in the media player world, which had many players such as MediaPlayerClassic and GOM Player, but did not reach standard. Development began in 1996 and was distributed under the GNU license in 2001, making it available to general users free of charge. At the time of release, open source software such as GNU license is rare, and although it can be obtained free of charge, it has high performance and high customizability, so VLC has quickly gained popularity, Increment It is written. In addition to this, it was thought that part of the popularity was that the introduction of a codec was unnecessary. Since VLC was originally developed as a sample for students to practice coding in a safe environment, Ecole Centrale Paris put a lot of resources at the beginning of development, and formal education Development proceeded as part of the program. However, as VLC succeeded as a media player, it seems that the provision of services as a project within the school was approaching its limits.

◆ Farewell from Ecole Centrale Paris
Remi Dennis Courmont, who is a lead developer at VLC and has been involved in the development of VLC since his school days, said, “In 2007 there was no one who really managed VLC. And VLC development was a bit painful, and VLC is no longer what the Ecole Centrale Paris students really want to develop, and it is of a scale that can be developed. 'It was disappearing,' he said, revealing the situation at the time when it was becoming difficult to develop VLC as part of school classes.

It was Mr. Kemp who saved the VLC development project that was reaching its limits from various aspects. Kemp decides to break the relationship with Ecole Centrale Paris in order to continue the development of VLC.

Since then, VLC has undergone major changes. VLC, a small software development project by students, created a company that worked as a VLC developer and consultant at the time of writing. Of course, VLC itself is developed and provided as open source software that anyone can use for free even at the time of article creation.

Since the number of people involved in the development was small, VLC's Ecole Centrale Paris departure plan seems to have progressed smoothly. In 2007, Kemp called all the people who had been involved in the development of VLC in the past and said, “The university is in a situation where it is impossible to continue to support the VLC development project.” He explained that he had an overwhelming shortage of students, and that it was difficult to maintain software development as a project in the school, and asked for an understanding of leaving the university.

Looking back at the time, Mr. Courmont said, “The decision to separate the project from school was difficult, but we didn't really have any other options at that time.”

Being independent from Ecole Centrale Paris, the VLC development project needed to decide how to proceed with development. Therefore, in 2008, the first

developer meeting was held, where developers were recruited and discussed. So Kemp says he has proposed “let's do it non-profit”. After that, it seems that VideoLAN, a non-profit organization for developing VLC in an instant after submitting the necessary documents, was born. Even after the development project leaves school, there has been no significant change in the way the team works, and there has been no change in the quality of the actual VLC provided, `` General people using VLC are completely different. I would n’t have felt it, ”wrote Increment. As mentioned above, VLC was released under the GNU GPL v2.0 license in 2001 and became a media player that can be used by non-stakeholders. In addition, distribution as open source software seems to have led to VLC's support for Windows and macOS.

◆ Diversification of core team
The release of VLC as open source also diversified the core team in development. Felix Paul Kuehne, the longest contributor to the development of VLC, has been involved in development since the beginning of 2003, when he was a 16 year old high school student. At that time, Mr. Kuhne was unable to code, but since he was from Germany, he started working on translating VLC into German. Mr. Kuine translated all the words in the VLC dialog boxes and menus into German and sent a document summarizing the translation to the VLC development team by email.

Looking back on that time, Mr. Kuhne said, “Sometime after sending the email, a college student who was 5 years older than me and who was proficient in software coding spoke to me. However, after discussing the features to be added, I learned how to code, ”he says, about his efforts at that time to develop the German version of VLC.

Kuene, who works as a doctor at an emergency medical center in Bremen, Germany, at the time of writing, is still the head of development for VLC. Mr. Kuehne is responsible for finding dedicated developers to contribute to the project. VLC has become a very popular software, but the core members who are involved in the development are still very small even at the time of article creation, Mr. Kemp said, `` There are about 10 members of the core team But between 100 and 150 people contribute to development every year. ' 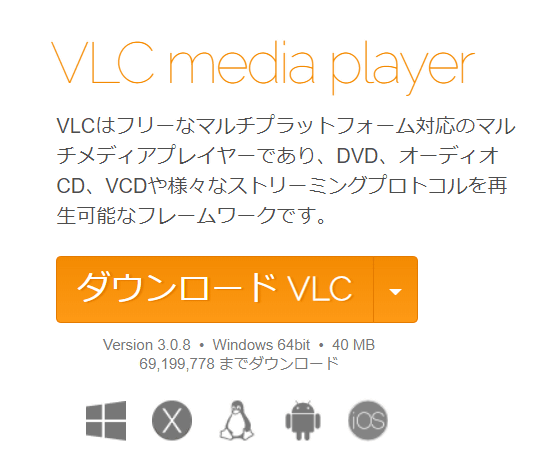 VideoLAN is a non-profit organization, but VLC has also created a consulting company called Videolabs that is responsible for the organization's for-profit department. This Videolabs is in charge of commercial use of VLC, which was not possible with non-profit organization VideoLAN, such as work to install VLC on smart TVs and mobile phones. Kemp said, “VLC is still open source software that can be used free of charge, and the development process is fully public, and Videolabs in charge of the commercial sector is not noticed by most users,” says Videolabs. Explaining.

Videolabs is also a consulting firm that supports VLC mobile adaptation. “When I started working on VLC, I did n’t expect VLC to be available on my iPhone or iPad. But now the number of Android and iOS users is almost the same as the number of desktop users. '

On the other hand, VideoLAN is promoting the development of an environment that will benefit developers by engaging in VLC development by introducing Docker and implementing compensation programs for people who have developed functions that are in high demand for VLC. . In addition, VideoLAN holds a conference for developers twice a year, actively discussing VLC development and striving to advance development from the user's perspective.

Thanks to the long-lasting VLC Developer Conference, the global development team involved in VLC development has formed a complex development community. “It led to building a community like when development was underway,” wrote Increment. VLC is both a desktop app and a mobile app, and it involves a complex combination of strange combinations, such as non-profit organizations and commercial companies involved in development. In addition, communication between VideoLAN and Videolabs seems to have been done via Internet Relay Chat , but communication between teams has gradually decreased over the past few years, and Mr. Courmon said, “Worry about the future of VLC. '

But Courmon commented, “VLC still has millions of users, so VLC will never disappear.” “We do n’t know what will happen in 5 or 10 years, but we ’re developing a great technology that ’s useful,” Kemp said, confident in both the quality of VLC and the quality of development. Said.