A sword held in both hands protruding toward the night sky

'I've lived a life of shame,' says Ozo Yanzo. Why is this happening?

Tokyo in 1974. In the center of the building, the shimmer is SHELL, a national organization that manages the health of the people and guarantees disease-free and longevity.

A half-century has passed since society became a society that does not require a doctor, and a commemorative ceremony `` passing ceremony '' to celebrate the first generation that has exceeded 120 years of average life expectancy will be soon by SHELL spokeswoman Miko Hiiragi It has been announced that it will be performed.

However, despite the fact that it is a 'healthy country with no illness,' everyone returning to work wears a large gas mask and does not look like a very healthy society.

And the bloody hands that make you feel uneasy.

Departure from the network is called the 'human lost' phenomenon.

For those who are hit by 'Human Lost', Grump loses standards and becomes a monster 'lost body'.

The 'Human Lost' phenomenon and the existence of the lost body have not been announced, and have become urban legends.

In the last 7 minutes, you should see that this work is an action that incorporates a number of unique SF settings while slightly considering the element of 'human disqualification'.

The main character, Hazura. A young man living a self-destructive life without finding a meaning to live in “Illness-free longevity power” who has overcome his death. The position is not far from the time of the original draft of Osamu Dazai's `` human disqualification '', but because the world thrown in is completely different, the fate he experiences is stranger than a novel To go. In the novel 'Disqualification of Humans', it was not a character that resonated with many people, but in this work entitled 'All Persons, Disqualification', some people sympathized with Hazura, who was rather tossed around. May come. He plays many characters such as '

In a novel, Meiko, who appeared as a tobacco shop's signboard girl and was once a fresh air freshener, is also a spokesman for SHELL and a member of the state agency 'Hirame' against Human Lost. He is one of the women involved in Hazura, and he has a big influence on his fate .... Extracting the elements, it is quite similar to a novel, but it is also an important person in flounder and its presence is a novel. It is greatly increased. It plays

Kana Hanazawa who is in charge of 'PSYCHO-PASS Psycho-Pass' as Tsunemori Tsuzuki, 'Zegapain' as Kaminagi Ryoko, and '<Story> series' as Nishiko Sekiishi.

In the novel, a bad friend Horiki appeared in a position to lend wisdom to a runaway group that repelled health management by SHELL. Since the leader of the runaway group Takeichi is also a friend of Hazura, he has a contact with Hazura. A person who thinks that humans have been disqualified from the social system that achieves “free disease and longevity”.

Takahiro Sakurai is known for the role of Osomatsu-san, Osomatsu Matsuno, Code Geass: Lelouch of the Rebellion, Suzaku Kuriki, and the role of 'FINAL FANTASY @ ADVENT CHILDREN' Cloud.

Okinawa San. He is also responsible for writing scripts for 'Ghost in the Shell ARISE' and others, and has a reputation for dealing with social issues in the 'near-future' world and at the same time building works that can be enjoyed as entertainment while being heavy.

The director is Fumichi Kizaki, who is in charge of 'Basilisk-Koga Ninpocho-', 'Afro Samurai' and 'BEYONETTA BLOODYFATE'. He is an active animator and a person who shows exciting actions and directing while watching.

If you know the novel `` Human disqualification '', it is a part that you can enjoy what elements other than the name of the character are left while the base changes greatly, but on the other hand, read `` Human disqualification '' at all The feature of this work is that you can enjoy it as a science fiction action even if you do not have it. There is a part that makes us think that a society without 'death' is healthy ... but we can put such a thing aside and focus only on the battle part and enjoy 'Uhyo !!' Ali of course. If you look at the main trailer, you should be able to see that the work has been shaken off in the action direction.

·to be continued
'HUMAN LOST Human Disqualification' Interview with Director Fumichi Kizaki & Cho Oku, How was a SF dark hero thing created from a novel by Osamu Dazai? -GIGAZINE 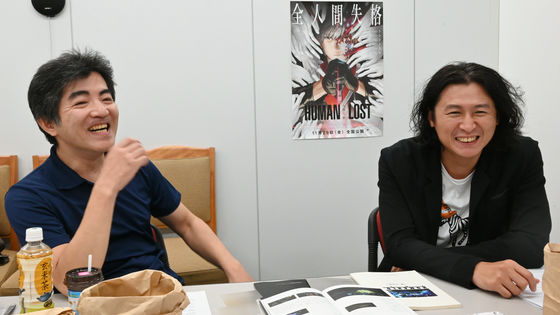