A sheet-like device that conveys 'feel' is developed Research teams such as

Northwestern University have announced a sheet-like device that is attached to the skin to convey the “feel”. The research team states that this device gives virtual reality (VR) and augmented reality (AR) a “immersion that has never been experienced before”. 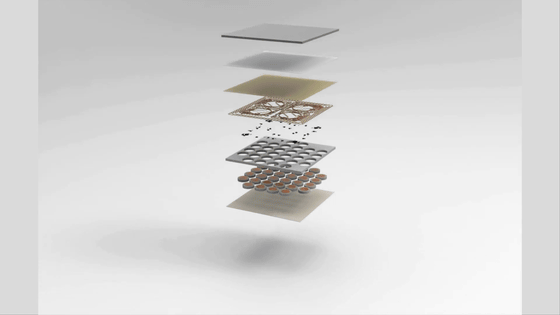 The layer that actually gives tactile sensation is made of

polyimide containing a small amount of copper, and a thin and elastic actuator is arranged. This actuator vibrates with a radio signal and transmits a “tactile sense”. The actuator is driven by

near field communication (NFC), which is also used in non-contact IC cards such as Felica, which can be powered wirelessly and does not incorporate a battery in the device itself. When you bend, you can see the presence of the actuator inside. In addition to the usages such as “VR game that conveys tactile sensation when touching the screen and the other party touching the screen,” “Tactile sensation is transmitted to this side.” The research team has devised a usage such as ” People with prosthetic limbs have the problem that “the power put in the prosthetic limbs is not known and it is difficult to adjust the power”. If this device can sense the pressure applied to the prosthesis at other parts, it will be easier to adjust the force. The research team is not only working on making sheet-like devices thinner and lighter, but also plans to work on transmitting “heat” in addition to touch.