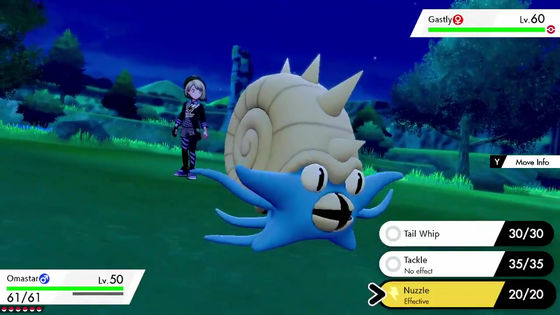 Pokemon Sword Shield released on Friday, November 15, 2019, not all Pokemon that appeared in past series appear in the game. Criticism gathered from many Pokemon fans about the fact that not all Pokemon will appear, but hackers newly remodeled the game data and appeared `` Pokemon that should not appear '' on Sword Shield An attempt has been made to

According to hacker Matt , Pokemon, which is said not to appear in the game when analyzing game data of Pokemon Sword Shield, does not appear at the time of article creation, but is included in the game as data That's right. Therefore, some Pokemon included in the data may appear newly in future updates.

For example, “ Lunaara ”, a legendary Pokemon that appeared in Pokemon Sun Moon, is a Pokemon that does not appear in Sword Shield, but it is included in the game as data.

'we don't know if they're usable it's probably just leftover data' lol pic.twitter.com/Ia0gRKLndh

According to Michael's, using a save file editor Wanpachi that should not appear in the Sword shield the Omusuta pattern which was modified to (level 50). Michael tweeted, “The remodeling itself wasn't too difficult. Of course, more work is needed, but it's pretty cool to see the omster in action.”

Well, that wasn't so hard.

A Ton More Needs Work, Of Course, But It'S Pretty Cool To See It Functioning. Pic.Twitter.Com/KYm1nkMsXO

The situation where Omster is actually moving is as follows.

Furthermore, a movie that records the operation of Omster during the battle is also released. Michael said, “The animation when entering the battle is broken, but it works fine otherwise. The status is clearly broken (the status has not been corrected even in personal attempts) This status was the one that I used for the remodeling. '

Animation on entering battle is pretty broken, but it works okay other than that.

Stats Are Broken Obviously (Did Not Fix The Personal Entry Yet), And This Was Originally An Edited Yamper That I Did Not Bother Giving Legitimate Moves. Pic.Twitter.Com/m1C8CzDQCt

Since the figure of Wanpachi was remodeled to Omster, the work that Omster can use (red frame part) is Wanpachi's `` Tail Whip '', `` Tackle '', `` Nuzzle '' You can confirm that According to Michael, the actual work time is about 1 hour , and the time spent on the development and maintenance of the tool “ PKHeX ” used for the work is not counted.

There is an indication that 'It was too difficult for game freaks ...' because it was possible to import a 3DCG model of one Pokemon into Sword Shield in about an hour of work.

Too hard for Game Freak though apparently ...
THANK YOU for proving this can be done in a short time!

However, the modification of the 3DCG model made by Michael cannot import Pokemon animation data and status information, so more work may be required.

Michael wrote that `` It is difficult to import old Pokemon into Sword Shield, but it is feasible '', and other hackers etc. will devise methods to accurately import animations, statuses, etc. I am expecting you. He also plans to develop a tool to correctly import Pokemon status that is not implemented in Sword Shield.

Wild area was too scared to cry pic.twitter.com/wrb6EeS2E7