A trailer of a live-action version of 'Sonic the Movie', which was redesigned because Sonic's design was too unpopular, how did you react to the new design? 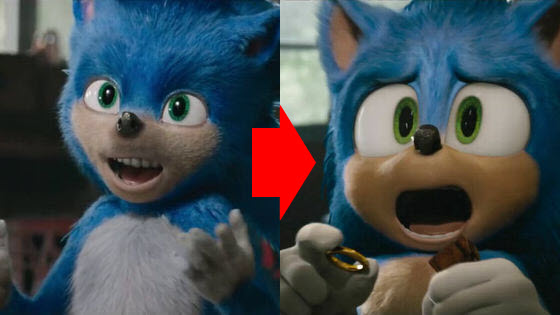 `` Sonic the Movie '', which is a Hollywood movie by

Paramount Pictures , Sonic the Hedgehog , a popular character of Sega, was originally scheduled to be released in November 2019, but a trailer will be released Soon , criticism of Sonic's design was gathered , and eventually the director, Jeff Fowler, promised to change the design . The latest trailer of the movie “Sonic the Movie” has been released, where you can enjoy the success of Sonic, a new design reborn after such twists and turns.


An area that seems to be easy to run, with some greenery and checkered ground spreading somewhere.

It seems to start running at the beginning of crouching ...

The main character, Sonic the Hedgehog.

I have warped somewhere else.

I came to a quiet residential area.

Sonic trains in a drum cleaner.

I wonder if I started playing table tennis with someone ...

I will also challenge Nunchaku ...

The next challenge is ...

Sonic as well as the pitcher.

Sonic is also in charge of the bench coach that signs the pitcher.

Give off a brilliant hit.

Do not you know the rules, round and round around continue to Sonic from the home base and first base second base third base.

If the Sonic super power reacts to something, the light shorts ...

A major power outage occurred in the North American continent.

Among the power outage commotion that caused Sonic, somewhere in the secret society organizations were not detect the abnormality.

The scene changes, James Marsden plays Tom have a gun you came into the house. Apparently he came to look into the house looking at the suspicious person.

The meeting of the two begins with a scream.

What came there was a mysterious organization that used a myriad of drones to search for Sonic.

Dr. Robotonic, who plays Jim Carrey, came down from the huge black truck. This robotic doctor has the dominance of the world using the power of Sonic.

At first, Sonic was hiding in the shadows and trying to do Dr. Robototic ...

Dr. Robotonic screams in the mysterious creatures he sees for the first time.

At that time Tom beat Dr. Robotonic and two people started to escape.

However, Sonic seems to be floating somewhere in the first car.

If you find a mysterious sign 'RUBBERBAND BALL' along the way ...

The movie is drawn quite comically overall, such as getting instantly with its super-fast legs.

Dr. Robotic is excited about a creature called Sonic with a mysterious super power. It will attract the audience with a strange dance.

Tom and Sonic's flight is a disgusting disguise ...

It will be flashy with high speed action by Sonic.

To see how Sonic's high-speed battle, which is chased by a mysterious robot, is expressed, I want you to play the movie and check it with a video.

There is also a service scene (?) By Sonic.

There is also a scene where you can feel the bond between Tom and Sonic.

An action scene with a huge robot on which Dr. Robotonic gets on.

The battle stage is the Egyptian pyramid ...

It extends all over the world, including the Great Wall of China.

When Sonic throws a golden ring ...

The ring becomes huge. The pyramid is visible in the back, so you can warp at once.

The newly released Sonic of the new design is on the Internet: “To be honest, the old Sonic design is terrible, but there is no such thing in the new design. We all have nightmares all at once. It ’s like Taka ”

It's honestly insane even LOOKING at the old Sonic design, it doesn't even feel real anymore.It's like we all together had a nightmare pic.twitter.com/a3H6OtHI3p

“I have to say that I love the expressive Sonic that appears in the trailer of Sonic the Movie.”

Gotta say I really love how expressive Sonic is for this new Sonic movie trailer pic.twitter.com/HBHdcobSpm

This is such a little detail but I love that they just put the Sonic logo design on the headband c: #SonicMovie pic.twitter.com/QJDcews6QU

Tweets such as “Sonic has officially become my dear now!” Have been received, and it seems to be well received.

sonic is now officially babie I love him pic.twitter.com/yE7hCjvsS5

In addition, Sega's official Twitter account has also released a trailer where the renewed Sonic's activity can be seen, and the fans are rushing to hear that “I am happy to become a cute Sonic”.

Sonic, who came to Earth, becomes a partner with the sheriff whom she met from a lot of things. Stop the ambition of Dr. Robotic (Jim Carrie), who aims at Sonic's power, and run around the world to protect his friends! Please look forward to an ultra-fast speed adventure. # Sonic the movie #SonicMovie # movie Sonic pic.twitter.com/lZ8U3wyeAI

Yuji Naka, the creator of the Sonic series, also wants to visualize past designs ...

A new design for the movie Sonic came out. However, it seems that the previous tweet has been erased. It is a pity that I wanted to watch the DVD with the previous design. https://t.co/XhmfNmr4EI

He commented that the part where Sonic's eyes are not connected feels strange.

It ’s a new trailer from the movie Sonic. I put on my gloves and it looked like a sonic, but my eyes are still not connected. I feel uncomfortable. But I'm looking forward to seeing the movie. https://t.co/C8EwuiJg2m