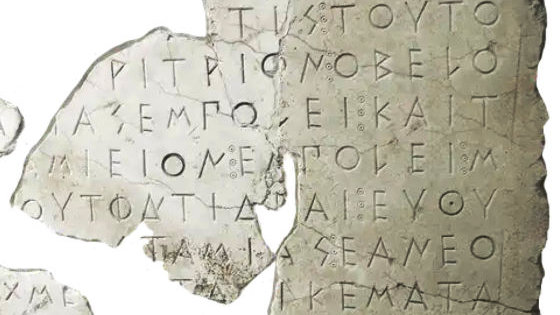 DeepMind uses AI algorithms in various fields such as disease prediction and energy efficiency . On Tuesday, October 15, 2019, DeepMind announced that it has developed an algorithm that predicts 'lost descriptions' from ancient inscriptions. AI will be completed in a matter of seconds, a work that human experts take 2 hours. 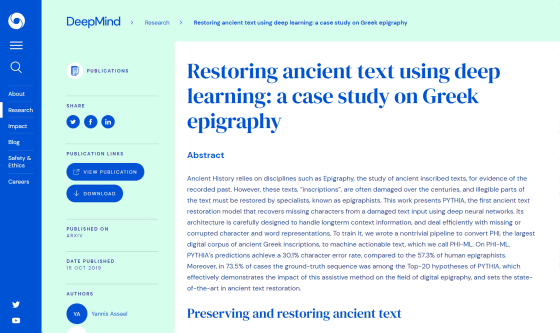 To understand history and ancient society and culture, it is necessary to read and understand the text written on scrolls and ruins. However, such documents are often left in an incomplete state because they are intentionally destroyed or weathered and fall apart over time. In the field of inscription research , experts are trying to decipher such incomplete documents, but the work is very complex and time consuming.

Therefore, a research team led by Yannis Assael of DeepMind trained a neural network using 'Pythia' and learned language patterns such as context, grammar, and text layout from 35,000 artifacts including 3 million words. Pythia who learned the language pattern, when given an inscription with 'blank', was able to present about 20 candidates for filling in. This technology allows experts to choose the right choice from Pythia's choices, rather than thinking of words to fill in the blanks from scratch.

In fact, we performed an inscription hole filling test to confirm Pythia's ability, and showed that Pythia had 30% fewer errors than humans. Also, humans need 2 hours to fill 50 holes, but Pythia was able to complete in just a few seconds. To fully decipher the inscription, it is still a stage that requires human hands as well as neural networks, but the researcher Thea Somershield of Oxford University who participated in the study said, “The inscription is an ancient world religion, society and economy. It ’s a tremendous achievement, ”he says. Human experts tend to overlook details when deciphering long sentences, but new algorithms are expected to demonstrate a high success rate in deciphering such sentences.