A computer scientist who embarked on elucidating the Voynic manuscript by AI appeared, what was understood by the algorithm? Uncrypted characters are written and a lot of strange pictures are written "Voynic manuscript"Although many linguists and historians try to decipher it, it is a book that many mysteries are still left in 2018 as well. He is a computer scientistNatural language processingExperts are trying to decode such Voynic manuscripts with computer algorithms.

Decoding Anagrammed Texts Written in an Unknown Language and Script | Hauer | Transactions of the Association for Computational Linguistics
https://transacl.org/ojs/index.php/tacl/article/view/821

Voynic manuscriptWas discovered by the collective collector in 1912. Many experts were written in a mysterious language that says "I have never seen it before," and since the author is not sure about what is more than one person and what it was written for, "the best in the world Mysterious book "is called.

How did the Voynich manuscript become "the world's most mysterious book"? - GIGAZINE 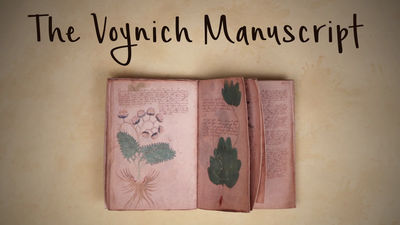 He is a computer scientist at University of Alberta,Natural language processingProfessor Greg Kondrak, who embarked on elucidation of the Voynich manuscript using AI (artificial intelligence). Professor Kondrak is doing research on computer analysis of ambiguity of human language with graduate student Bradley Hauer, and the Voynich manuscript was chosen as case study subject.

First of all,Universal Declaration of Human RightsWas translated into 380 languages, so that computers can systematically identify languages ​​with 97% accuracy. At first, the researchers had hypothesized that "Voynich manuscripts are written in Arabic languages?", But as a result of running the algorithm, the closest thing to the language of Voignic manuscripts is Hebrew I conclude that it is a word.

"This is surprising, it is only the first stage to decide that it is" Hebrew ", next is how to decipher this," Professor Kondrak said.

Next, Professor Kondrak thought that the description of the Voynich manuscript was written with the anagram "Alphamgram" which arranges the letters in the word in alphabetical order. And when Prof. Kondrak and others tried to decipher Algorism to decode such text, I found that over 80% of the words are in the Hebrew dictionary.

"But we did not know what meaning would come from combining words," says Kondrak. In order to confirm whether our findings were correct it was necessary to find a Hebrew scholar, but no Hebrew scholars were found, and finally researchers used Google Translate. As a result, the first sentence of the Voynich manuscript is a sentence of "She made recommendations to the priest, man of the house and me and people (people, myself, and the cleric who is the man of the house she recommended) Although it is strange as it is, it seems that it was able to translate in a form that grammatically holds. However, because he could not find an ancient Hebrew scholar, there are still mysteries remaining in the whole sentence of the Voynich manuscript. Researchers are seeking people who are familiar with Hebrew and at the same time are historians.

Kondrak says, "I do not think experts in Voynich manuscripts will be familiar with such research, because they might feel terror as computers replace themselves." , Meanwhile they hoped that their research will be accepted by experts.

Researchers are planning to apply the developed algorithms to other ancient languages ​​in the future.