There is no doubt that Super Mario Maker 2's super-muse course, which is essential for cooperative play, is too difficult to become a friendship crusher In Super Mario Maker 2 released for Nintendo Switch in June 2019, players from around the world have unique courses such as `` the worst 1-1 remake ever ' ' and `` 3D dungeon RPG-style solid labyrinth '' It has been created. There are many super-difficult courses with a clear rate of only a few percent depending on the thing, but there is also a fierce course that can not be cleared unless two people play together, it is too difficult and together It's about destroying friendships with friends who play .

The topic that will become a new age friendship crusher is “PePanga Bros .: Hit Me Up”. The course ID is “1X4-P53-C3G”, and it is necessary to proceed while cooperating with two people as described in the description column “Please play cooperatively with this person. Good luck!” Course. The clearing rate at the time of article creation is 0.23%, and the number of challenges exceeds 12,000. You can play alone, but if you choose 'Play with everyone', you can play with more than two people at the same time. 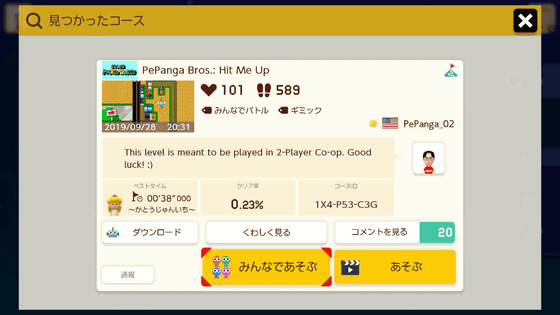 Panga created the course. He is a person who delivers live game play etc. even at Twitch etc. When creating “PePanga Bros .: Hit Me Up”, he played with TonesBalones and finally cleared the course over 6 hours doing.

The whole movie, which lasts about 7 hours by Panga and TonesBalones, can be seen in the following movie.


The following movies are shortened to play at the moment of clearing the course with two players.

I promise this is the best thing you will ever watch.Welcome to Mario Maker 2's very first (insane) Kaizo Co-op level ft. @ TonesBalones_ 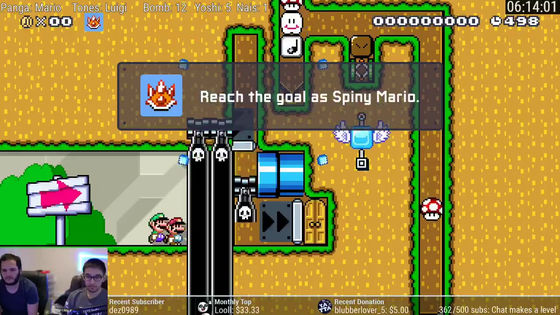 First, the two people split up and down ... 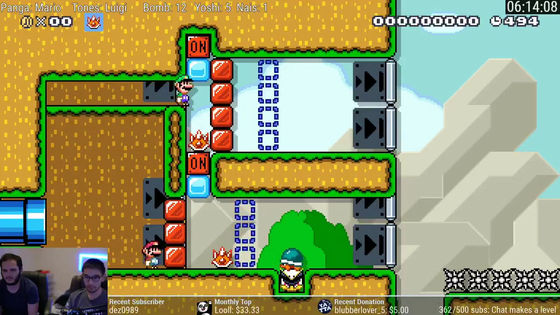 An ant who needs to wear Togemet. First, the player at the bottom of the platform starts, hitting them against the wall ... Jump using this as a foothold. The second player started from the foothold at that time. Luigi jumps on Mario starting from the bottom scaffolding. Falling Mario jumps with Choro Poo as a foothold. Meanwhile Luigi clicks the ON / OFF switch to secure a route to Mario's scaffolding. Now we were able to evacuate to a safe scaffolding. In the same way, this course is to jump through dangerous dangerous traps by jumping and jumping with Pyongpyong while using these, enemies, items, and allies as a foothold. Next, the top Luigi jumps first. Luigi steps on the saw and Mario collects them. Mario just throws them up and Luigi receives. Luigi throws these while falling, Mario jumps again to the scaffolding of the saw that fell on the thorns. The first thrown bumper hit the ON / OFF switch, and Mario's footing was secured. The precise play that does not allow any deviations, and the need for a play where the two of them are in tune with each other, is moving as if you are seeing a Pythagora switch as if you have reached the realm of art. If you're curious about the continuation of completing 'PePanga Bros .: Hit Me Up' with two players, check out the course's artistic finish in the movie. 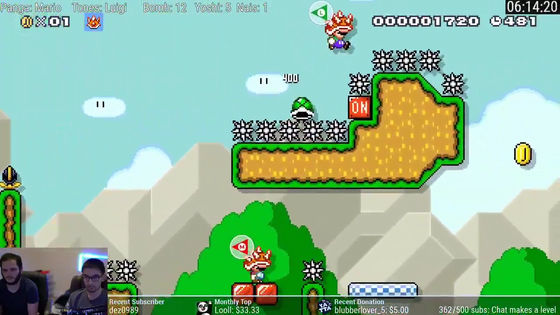 In addition, even one person can play and clear the course. However, in that case, the clearing method will be different, so the impression will be slightly different. In addition, you can check the state of clearing 'PePanga Bros .: Hit Me Up' by one player in the following movie.