It turns out that microorganisms inhabit a puddle of 2.4 km underground isolated from the outside world 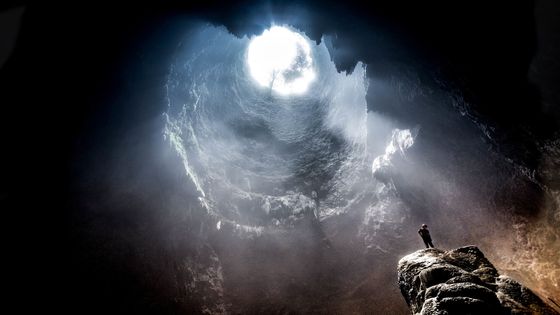 As research by scientists progresses, it has become clear that there are many microorganisms on the earth that inhabit extreme environments such as volcanic craters and deep-sea hydrothermal vents. A team of geologists at the University of Toronto investigated the Kid Creek mine in Canada and reported how many microorganisms were found in the water that was 2.4 km underground.

Scientists Discover Microbial Life 2.4 Km Underground in Depths of a Canadian Mine
https://www.sciencealert.com/scientists-discover-microbial-life-2-4-kilometres-deep-inside-a-canadian-mine Barbara Sherwood Lollar and others took a sample of water collected at a point about 2.4 km deep from the ground inside the Kid Creek mine to see if organisms exist. I investigated.

Deep underground areas accessible to humans through mining have been isolated from surface air and sunlight for a very long time, and sampled water has also been blocked from the outside world for millions of years. It seems that it has been done. After confirming that the collected sample was not contaminated with water near the surface, the research team analyzed and found microorganisms in the sample water. As a result of giving food sources to the microorganisms cultured from the sample and measuring metabolic activity, it was found that these microorganisms living in places without air and sunlight survived using sulfate as a nutrient source . Lollar claims that it is very nice to see microorganisms in the sample. “We were convinced that there would probably be microorganisms, but it was a long way to come to find solid evidence that actually supported the hypothesis,” Lollar said. In addition, this discovery is not only interesting that microorganisms were discovered in a very severe environment, an isolated space of 2.4 km underground. It is also worth excitement for Mr. Lollar that the recognition that “microbes that live in such an extreme environment on the earth are not so rare” is growing.

Mr. Robert Hazen, a mineralogist at the Carnegie Institute , claims that the discovery of microorganisms that inhabit deep areas in the ground and in the ocean has revealed a wider variety of biospheres than humans thought To do. Lollar's research was done as part of an international project called Deep Carbon Observatory that comprehensively maps the biosphere inhabiting deep areas from the earth's surface. The project team describes the biosphere that extends deep in the earth as 'underground Galapagos', like the Galapagos Islands where many endemic species exist.

Microorganisms that inhabit deeper areas can inhabit and propagate in environments that humans cannot imagine. For example , a bacterium called Methanopurus candori that lives near the hydrothermal vent in the deep sea can reproduce in an environment that exceeds the boiling point of water, and microorganisms that can live under pressures exceeding 20,000 times the atmospheric pressure have been discovered . “We knew we didn't really understand the limits of living things,” commented Lollar. As a further challenge, Lollar faces the relationship between the biospheres in multiple extreme environments. “These biospheres have a single origin of biogenesis, about 4 billion years ago,” Lollar points out, genetic analysis of genes living in the deep earth by analyzing genes. I wanted to find out within 1-2 years.