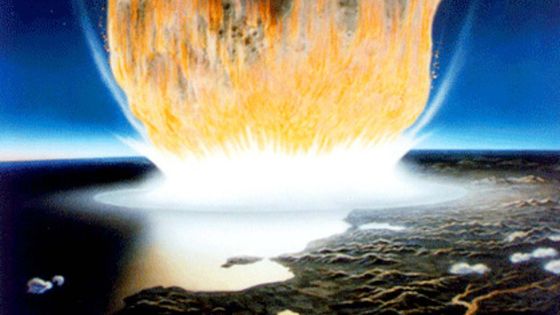 It is said that the extinction of the dinosaur

was triggered by the collision of a huge meteorite, but what exactly happened due to the collision was not specifically understood, and there was no choice but to infer from the simulation results. In the meantime, a direct survey of the most prominent craters as traces of meteorites that led to the destruction of dinosaurs revealed details about what happened immediately after the collision.

Scientists Discover New Evidence of the Asteroid That Killed Off the Dinosaurs-WSJ
https://www.wsj.com/articles/scientists-discover-new-evidence-of-the-asteroid-that-killed-off-the-dinosaurs-11568055601

The Chikshrub crater, about 160km in diameter in the northern part of the Yucatan peninsula in Mexico, is a meteorite collision that is said to have come to the earth about 6.604 million years ago. It is said that the energy when a huge meteorite with a diameter of 10 to 15 km collides is about 1 billion times that of an atomic bomb dropped on Hiroshima, making it the most promising candidate for the extinction of dinosaurs.

However, no matter how powerful the collision, it is unlikely that 75% of life on Earth will be killed by the impact and heat generated at that time. For this reason, it is a common belief that the earth and sand rolled up by the meteorite collision covered the earth and caused cooling, which was the direct cause of mass extinction, but this theory is out of speculation to the last not.

So, an international research team, including professor Sean Grick, a geologist at the University of Texas at Austin, excavated the peak ring of the Chickshrub crater off the Gulf of Mexico and was 10 feet long over two months A rock core was collected. The sample collected was analyzed to see how the meteorite collided. Biomarkers of charcoal and soil fungi were found in samples taken from the crater. For this reason, the research team sees that “a large-scale fire occurred due to the heat of the collision, and they were swept away by the tsunami and flowed into the huge depression caused by the meteorite impact.” The range of the fire was about 900 miles (about 1500 km) in radius from the collision point, and the tsunami was about to reach Illinois, USA, 500 miles (about 800 km) away.

In addition, it is known that seawater and sediment flowed into the crater that opened to the bottom of the sea with tremendous momentum, and it seems that about 425 feet (about 130 m) of formation was formed in just one day . The formation rate of this formation was faster than any formation formations discovered so far.

However, the biggest discovery is not “what was found in the sample”, but in “what was not found in the sample”. Because the rocks in the vicinity of the Chikshrub crater contained a large amount of sulfur, the sample did not contain any sulfur. For this reason, Prof. Grick and colleagues believe that at least 325 billion tons of sulfur were released into the atmosphere due to the impact of meteorites, causing the sulfide minerals contained in the rocks near the crater to evaporate. Prof. Grick and colleagues speculate that sulfate aerosols generated from large amounts of sulfur and rock vapor have caused solar blockage and massive climate change, leading to long-term global cooling. Prof. Grick compared the story of how the dinosaurs were extinct, saying, “The dinosaurs were first fried and then frozen.”

Also, 'The real killer should have been the atmosphere, not the meteorite. There is nothing else that can cause mass extinction to the extent that the dinosaurs are destroyed.' He expressed his view that this is a powerful support for the previous theory.