The largest computer chip ever built with 1.2 trillion transistors is developed 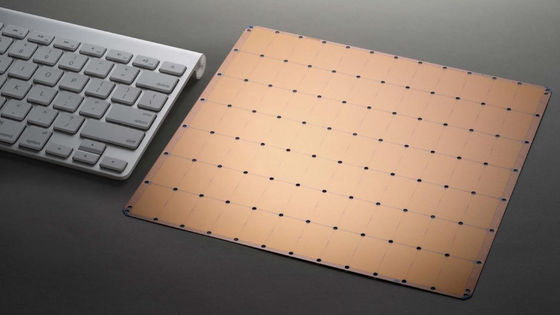 Cerebras Systems , a startup that produces chips for machine learning and deep learning, announced that it has developed the Wafer Scale Engine , the largest computer chip ever built. The Wafer Scale Engine is 20cm x 22cm in size, and it is said that 1.2 trillion transistors are mounted on it.

Today is the perfect day to share our first tweet as we have announced the largest chip ever built to accelerate AI compute! Read all about the Cerebras Wafer Scale Engine (WSE) via @WIRED and @tsimonite https://t.co/ATaBRnxnGD pic.twitter.com/dX0xetyX6X

Cerebras Systems presented details about the Wafer Scale Engine at the Hot Chips conference on microprocessors and microcomputers at Stanford University on August 19, 2019.

Wafer Scale Engine are aligned 40,000 to an area of 2225mm 2 40 million units of SLA (sparse linear algebra) core, connection bandwidth of the core that the it 100Pb / s. It is the largest chip for processing and seems to be 56.7 times the size of Tesla V100, the largest NVIDIA data center GPU ever. 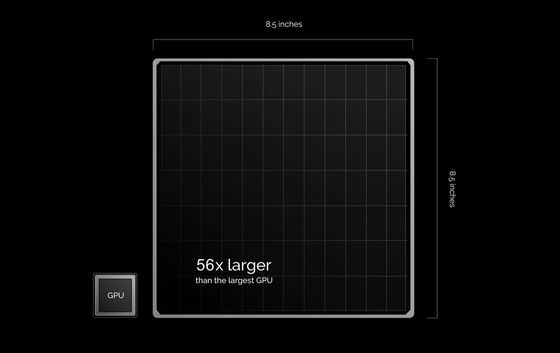 Also, the Wafer Scale Engine has 18GB of SRAM and is claimed to have 9Pb / s memory bandwidth. The production is based on TSMC's 16nm process. 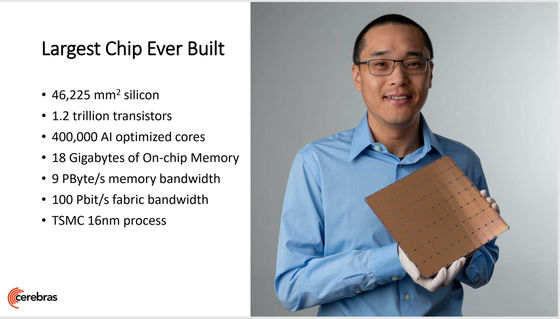 However, such a huge chip will inevitably contain defective products in the core on the wafer. Normally, defective chips with defects will be discarded, but in the case of Wafer Scale Engine, there are cases where more than 400,000 cores are mounted, and it is impossible to use part of the core due to defects. It is said that the assumed redundant design is performed.

Large chips also have cooling problems as well as manufacturing. In order to cool a chip that is about the size of a computer keyboard, it is necessary to install a water cooling system that directly cools the chip by installing a pipe through which the coolant passes because the heat sink and fan that are conventional air cooling systems can not catch up . Because the chip is too large to fit in a traditional package, Cerebras Systems seems to have a customized cooling system and connector dedicated to the Wafer Scale Engine.

Wafer Scale Engine has become a chip of unprecedented scale, but of course it is not intended for personal PCs, but is expected to be used in data centers where machine learning and deep learning experiments are performed . Cerebras Systems expects the Wafer Scale Engine to be particularly active in large-scale development projects such as assistant AI and autonomous vehicles.