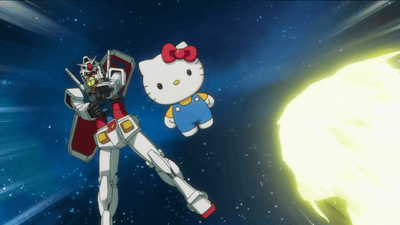 Special PV episode 2 of ' Gundam vs Hello Kitty Project ' will be distributed today from Tuesday, July 2, 2019 with ' Gundam Kitty LINE official account ' friends limited. To see, if you become a friend and send 'Meeting' on the talk screen, it's OK.

The special PV episode 1 was Kitty who saw the figure of Amuro that shed tears during the one-year war on a television on a peaceful earth, and jumped into space to help Amuro.


In the second episode, Kitty finally appeared before Amuro. Amuro who is puzzled has the contents that Kitty appeals to the importance of 'everybody is good'. In addition, from July 9 (Tuesday), it will be open to the public on YouTube.

'Excel Unusual' which collected the wonderful Excel file which exceeded the level of spreadsheets, such as 3D flight simulator making with Excel, was collected-GIGAZINE

Why are 'Trajan' fonts used a lot in movie posters? -GIGAZINE

I tried using an 'air sofa' where you can make a sofa for two or three people easily and easily-anytime, anywhere-GIGAZINE

This was the first time I laughed at the opening of the news pic.twitter.com/DKSFfKIu56

ladies and gentlemen! ! ! We are waiting for you, what does you say in Gunma's Seriously Kaneichi Beer, 2019 pic.twitter.com/n7xLx8i1CJ

The stabbed host already revives to the host grass again and stabbed by someone pic.twitter.com/1gUwJ3KuUR

I got a new cup when I got home, but I got instructions on how to drink the liquid from the cup for human beginners. Pic.twitter.com/XMzePrcRnH

Today's game of Ryota Fujii seven steps. Horiguchi Kazushiza 7-dan who shows drunken hand in a convenience store bag hand after making the opponent wait for a long time, and tries to be upset in a surprise attack, and with no one's eyebrows in it, Fujii knocked out a bazaari in the game Seven columns of Yuta. Mental power that does not seem to be very teenage. pic.twitter.com/RMnd2hAGMq

Earth Pharmaceutical withdraws from sales of soap 'Muse' at the end of 19: The Nihon Keizai Shimbun

Own elevator remark 'decement' and the prime minister |

Gangsters, why the target is a series of financial robbery damage reason: Asahi Shimbun digital

Put an abrasive in the shampoo of a senior member of the Self-Defense Force.

I was attacked by a beast.
It is an absolutely dangerous thing that changes even three month old kittens into fierce ... pic.twitter.com/YXgUlCHOxV

— To Japan where there is no buying and selling of pets Sawaki Takashi @ pets (@takashisawaki) July 1, 2019

Put a bag of noodles and cut vegetables in a bag and put in 400cc of water and wrap with a mash and 600w for 6 minutes and 40 seconds.

A busy modern person's savior pic.twitter.com/yabPDphnX5 , which is about 200 yen, which is delicious and cheap.

I tried to make a hand-painted shirt, but it was a lot of fun. https://t.co/4el8i5HfAy

Supporting 'I Don't Want to Return'-Thoughts of 'Links' between Prison and Welfare-Yahoo! News

This is a breakthrough too ... pic.twitter.com/LNWJL7Awot

For beginners: The necessity of database selection-Qiita

In conclusion, the fact that you entered a specific pre-specified keyword was sent to Omega's server from time to time. It should be called a keylogger as well as a keyword logger. As a result, Omega was able to obtain the user's used application name and part or all of the input content (including personal information, confidential information, and sensitive information).


'Does the usual attack be the whole attack and do you like the attacking mother twice?' Just before broadcasting PV / July 12 (Fri) Start broadcasting from 24:00! -YouTube

I came to the manga exhibition of the British Museum, but there was a Comiket catalog from last year and this year, so everyone in the circle congratulated you on your debut in the British Museum. pic.twitter.com/ctNMMolkUa

De M girls and the story of the disappointing queen pic.twitter.com/b20xXHFLRv

My daughter did not know Pokemon, so I called this lucky 'Yakigoori-san'. pic.twitter.com/BFoO8JtWjJ

I tried to do the HALIOTA GO, but I can not translate it and it is interesting

Leaders of each country who participated in G20 (cat type) pic.twitter.com/qYZR3eEjcd

It is a cartoon that goes to Comiket with the young head of Yakuza! 1 pic.twitter.com/Qo1IDbhWVB

'I like you' # The bride of five equal # Nakano Nino pic.twitter.com/egkX34QrW5

'If you get up in the waves' WEB special PV-YouTube


'Let's Become a Novelist' Announcement of the 15th Anniversary Event

Since its founding, “Let's become a novelist” created with registered users, we are celebrating our 15th year.
Therefore we hold a gathering of wonderful fans with their daily appreciation!
Let's get together at a commemorative anniversary event!
We are looking for registered users who can participate in the event.
Please apply on this occasion.

You are too cool pic.twitter.com/bDW6fCN3Mg

It really is really good, but there is a connection that no one knows that Koitz, who was a Hulk student in the Hulk solo film, is a spiderman and Peter's teacher. Can you remember the guy about 13 years ago .... pic.twitter.com/EOoaSCDIgx


Nabepro to which Zabunguru belongs, makes a perfect response to the black sales problem: Nanji Great Stadium @ What J Summary

Otani's colleague Skaggs suddenly dies ... Two days ago, he has 7 wins this season with a starting pitch: Nanji Great Stadium @ What J Summary

What a J PRIDE: [Any hit] Hanshin, Takashi Toriya's all hits this season to this season [God]

[Hanshin] Nishi 'Everyone does not want to win ...': Nanji Great Stadium @ What J Summary