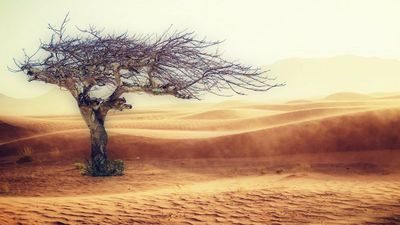 According to biologists, while attempts to discover new species of plants and animals are relatively active, plants that are already extinct or nearly extinct are not much respected. Meanwhile, as a result of extensive follow-up survey on known plants, it was found that human beings are extinct plants at 500 times the speed of the natural world.

The research on plant extinction was carried out by a group of elders Hanfries, who study environmental plant science at the University of Stockholm, Sweden, and botanists at the Royal Botanic Gardens of the Kew, England. Hamfries et al. Conducted a survey based on a database created by the research project on known plant species, which Rafael Gabearts, who is also a member of the research group, started in 1988. Based on research on more than 330,000 plants in total, we have found that as many as 571 plants are extinct from the 1750s to the year 2019.

The figure of 571 is about four times the number of endangered plants listed in the Red List of the International Union for Conservation of Nature and twice the total number of extinctions of all previously identified mammals, birds and amphibians It goes well above. In particular, about 3 species have been extinct annually since 1900, and the rate of extinction is 500 times faster than before the industrial revolution in the 18th century.

Moreover, the number of 571 is 'the result of severe underestimation,' says collaborator Dr. Maria Vorontsova. For example, in this figure, there is a certainty of extinct but extinct in the form of 'only one or the other of sex exists' and 'the animal which mediates the seed is already extinct' It does not contain thousands of plants. It is also speculated that there are quite a few species that were extinct before being discovered.

The following image is a map showing the distribution of seed plants that have disappeared since 1900, and the darker the color, the more plants are extinct. Humphreys points out that many plants are extinct, especially in areas where biodiversity is rich and population growth is remarkable, such as Hawaii, Madagascar , Brazil's rainforest, India and South Africa. Co-researcher Eimear Nic Lughadha explains that plant extinction is 'a tragedy for all living things.' Plants not only supply oxygen through photosynthesis, but are also the basis of the food chain and ecosystem, so even if one kind of plant is extinct, other organisms may be chained out. Because there is. With regard to the results of this research, Alan Gray, who works for the Institute of Eco-Hydrology in the UK, 'thinking what we humanity can do for biodiversity, not what rich biodiversity can bring us Time has come, ”commented, and was asking for a sense of crisis about the devastating effects of the accelerating extinction of plants on life on Earth.