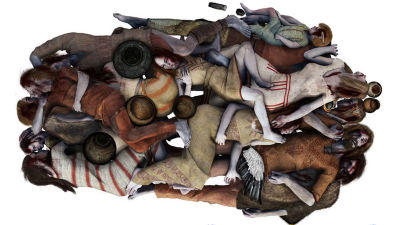 An ancient burial site was found that 15 people, including children, and four families were beaten and killed in their head, but were buried in a very polite manner. In this burial site, the bodies are not random, and they were placed based on the family's relationship, such as 'the mother next to the child' and 'the brothers are next to each other'.

15 People Were Brutally Murdered 5,000 Years Ago, But the Bodies Were Buried with Care
https://www.livescience.com/65474-neolithic-murder-and-burial.html

A late Neolithic burial site was discovered in 2011 during the sewerage construction of Kosice in southern Poland. An archeologist Niels Nordea Johansen from Archaeological University of Aarhus in Denmark conducted research, and found that the 15 people buried in this burial site were those who had their heads beaten 5000 years ago and were massacred It turned out. According to Johansen, Kosice's burial site says, 'The children are laid next to their parents, the brothers are next to each other, and the elders are near the center.' According to Johansen's research on the family, those who were buried were composed of four nuclear families, and the four families were closely related. Also, as a result of genetic analysis, people belonged to the

globular amphora culture, and there were four male lines and one female line, so it is believed that the culture was that women from the neighborhood came to marry men's communities. 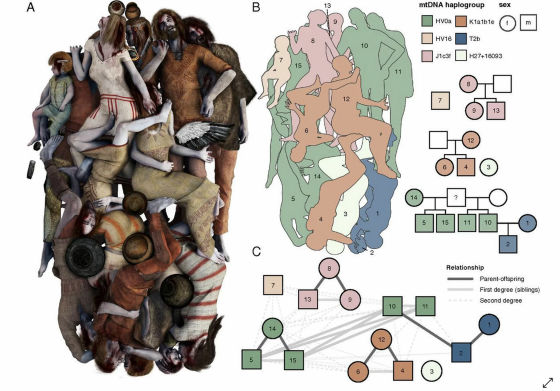 It is unclear who killed four family members, but it is the researchers' view that it may not be another person. 'It takes a lot of effort to do this burial. The people who buried them were familiar with the family,' said Johansen. It is possible that it was a hurry to bury the bodies separately instead of separately, but still the bodies were laid based on the relationship, and tombstones such as amphora and ornaments were buried together. In addition, it is also possible that the family was killed when the father was absent because the burial site did not include the person who corresponds to the father.

New century late step zone by the presence of the group to be moved from the east, culture of Europe had greatly transformed. It's a horrible slaughter, but researchers say it's no surprise that such a slaughter would occur in times of turmoil where territorial clashes were frequent.

Archeologist Christian Mayer, who has not participated in the study, points out that there is also a 4600-year-old burial site where the family was carefully buried in a similar place in Oirau, Germany. The two burials are very similar. Mr. Meyer stated that the burial site is one of the evidence that fatal violence often occurred in the late Neolithic period.