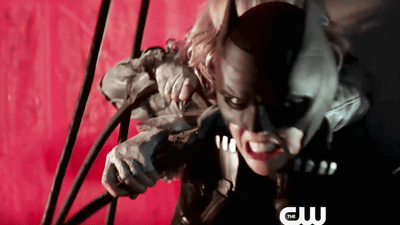 A trailer for the 'Batwoman,' a TV drama in which the protagonist Kate Kane wears a Batman suit and fights as a batwoman for the abducted former lover in

Gotham City where it has been three years since the Batman was gone Has been published.

Since Batman was lost three years ago, Gotham City is now secured by the private security company The Crows.

The Crows was founded by Kate's father, Jacob (play:

However, the rally is hijacked by a 'wonderland gang' led by a white-haired beauty, Alice (played by

Alice smiles with an invincible smile, saying, 'Do you believe that The Crows will protect you?'

With Alice in the spotlight, the Wonderland gang has succeeded in abducting Sophie, who is the guard of The Crows, played by

Sophie and Kate were lovers, during the military years.

To help Sophie, Kate is alone in the enemy area.

However, I received a counterattack of Wonderland gang fighters ...

It is captured and taken to Alice's origin.

The captured Kate is released as a message to The Crows. When Kate, whose father, Jacob, told me that he didn't want to lose you, was acting insanely, the destination was Wayne Enterprise, managed by Batman Bruce Wayne.

Camrath Johnson ), who was at Wayne Enterprises, warns Kate, who has suddenly visited, with a Taser gun. Luke Fox is the son of Lucius Fox , who provided technology and gadgets to Batman and also managed Wayne Enterprise.

Kate responds to Luke asking, 'Who are you!' It is revealed that it is related to Batman.

Kate operates the elevator that was hidden in the bookshelf, ignoring Luke's stationary, whether he knew the structure of the building in advance.

The elevator was connected to the hidden room.

While bats were flying around, it was ...

Kate wraps up in a suit tailored for women and fights against wonderland gangs to help Sophie.

The scene where you race on a bike and ...

There is also a scene to dive from the height overlooking the skyscraper.

At the end of the trailer, a red-haired batwoman appeared.