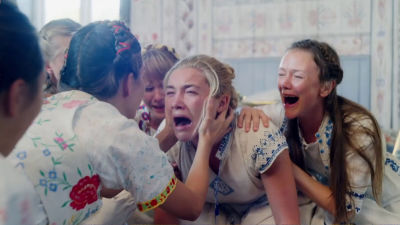 Hereditari / inheritance ' debuted at Ali Astor latest trailer of supervision latest work 'MIDSOMMAR' has been published. From the first trailer that was close to the image video, it has become a content further into the story.


Men and women who show whether they go to a certain 'Swedish festival'. 'I told you that I wanted to go to the festival,' argued the man, saying, 'You said,' I wish I could go '.

Then men are talking about 'Swedish festival' again. The man 'Christian' who this one mentioned earlier as a woman 'Dani'. While talking about whether Christian will leave Dani, the four will go to the festival together ...

'Don't forget to meet a Swedish beauty in June,' nails.

There, a phone call from Dani.

Dani has a mental problem and seems to be constantly calling Christian.

Dani crying in the bathroom.

The 'Swedish festival' seems to be a distraction of Dani who has a problem.

A special festival in which everyone wears and performs ceremonies. This festival is said to be held once a year to carry out a ritual.

Pastoral and beautiful sights are spreading.

A welcome toast with 'Welcome to Fun MIDSOMMAR!'

The place where the festival takes place is like a white night, and the time is nine o'clock, even though the blue sky is spreading.

Paintings of girls performing some rituals.

And on the 'special day' I came in, as the girls were in the painting, they were spinning in front of a long stick.

A mysterious drink to be distributed.

He breathes out loud and loud.

In the pastoral image, a sinister shadow ....

'What am I doing?' Tears down Dani.

People who stand in a dark place have a different atmosphere from bright hours.

'I don't want to adapt. I want to leave here,' said Dani.

A creepy smile of a woman who took the toast.

My feet float in the air.

'Ritual' to be performed with a cry

The reality is getting distorted more and more.

The man who brought Dani to this point is accused of 'You are responsible.'

Dani yells while surrounded by women.

A girl who emits many voices when drinking 'Ha'a' and a mysterious drink.

And in the ceremony that began ...

An image showing a bear.

With the people of the beautiful world ......

MIDSOMMAR will be released to the United States on July 3, 2019, and release in Japan has not been decided at the time of writing.