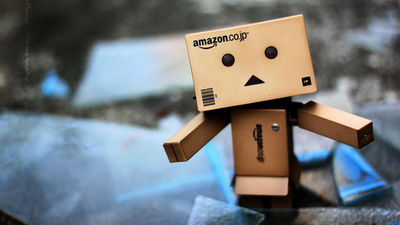 Amazon.com has released a machine that automates the work of ' scanning products flowing from a conveyor belt and packing each into a suitable-sized cardboard box ' in which thousands of employees are engaged. Amazon has introduced two machines in each of the 12 or more warehouses, which will eliminate the employee's task of packing cardboard products at a total of 24 locations.

As automated goods cardboard filling machines automate one of the most common warehousing tasks for Amazon, Reuters 'shows how Amazon is driving efforts and increasing profits 'Is written. It's well known that Amazon is trying to automate everything, including product pricing and shipping in the warehouse.

An Amazon spokeswoman told Reuters, 'We're piloting this new technology with the goal of improving security, reducing delivery times, and improving the efficiency of the entire network.' He also says, 'I expect efficiency gains will lead to reinvestment in new services for customers that will continue to create new jobs.'

Dave Clark, senior vice president of operations for Amazon, said, “Probably (the Reuters article) heading is wrong on his Twitter account. Amazon is going to make packaging boxes smaller and use less waste. The fear of losing work may be felt by most people, but the number one problem for us is enough to engage in the work we have and the work we create It's about finding a few people, ”explains the work efficiency in the warehouse as reducing waste and turning the workforce into another job.

Perhaps a diff headline .. AMZN tests tech that makes packages smaller with less overall cardboard waste ... For all this fear of lost jobs the # 1 issue for most of us is finding enough people to fill the jobs we have the new ones we are creating ... https://t.co/uHIfUcm6AF

According to one source, Amazon said it would use it to supplement the packing role in other places, new lines, etc. instead of firing the labor that was floated by the introduction of automated goods cardboard filling machines. You are Amazon is often regarded as a problem in its harsh working environment , and in particular, warehouse workers are known to have a very high turnover rate. Automatic goods cardboard filling machines seem to be expected to help employees who have been packing work stay in the company while covering this high turnover rate.

According to a source, the automated goods cardboard filling machine introduced to Amazon's warehouse is a machine called CMC CartonWrap made by CMC Machinery in Italy. Packing of 600 to 700 boxes per hour is possible, and packing work is four to five times faster than human manual processing. However, this machine requires one employee to run the goods ordered by the customer on the conveyor belt, another to check the cardboard adhesive, and another to check the cardboard jam occasionally That's right.

You can see how CMC CartonWrap actually packs products in a cardboard box in the following movie:


Amazon has revealed that it will further improve shipping speed as a service for Prime members, but the automation of this packing operation is not a speed-up measure, but it is 'related to efficiency and savings,' a related person said I speak. The Amazon warehouse is able to automate most of the packaging work, including a machine called 'SmartPac' developed from a patent acquired for mailing goods in envelopes.

Amazon is not alone in introducing CMC CartonWrap. According to sources, companies such as Walmart, JD.com, and Shutterfly, besides Amazon, have also introduced the same machine to make packing work more efficient. Wal-Mart has introduced CMC CartonWrap for three to five years, but the company did not get any comments.

Not only CMC CartonWrap, but also many venture companies and researchers at universities are using artificial intelligence and cutting-edge technology to create high-precision robot hands etc. and try to develop technology that is useful for automation of packing work. . And Amazon has tested several cutting-edge technologies such as Soft Robotics , and CMC CartonWrap is considered to be a part of it.

Of course, these machines are not flawless and CMC Machinery can not mass produce CMC CartonWrap. According to a person in charge, CMC Machinery needs a technician who can correct problems when machine troubles occur. Even so, they have already proved that they can be fully used at Amazon's warehouses, saying that they would like to introduce them to warehouses in busy areas like Seattle, Frankfurt, Milan, Amsterdam and Manchester.